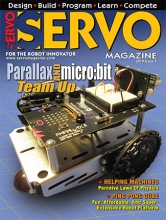 Developing algorithms for leveling so our walking robots can stay upright.


Building a Future One Robot at a Time

Getting kids started in robotics can be life-changing in more ways than one.


Human Media Lab Takes LEGO to the Next Level


Robots in the Ballet

The fun and hassle of robots in a ballet show.

Wherever possible, robotics and automation specialists are working to help cope with the corona pandemic.


A Quick Experimenter’s Guide to Servomotors

Servomotors are indispensable in robotics.

Why you need a Z axis zero setter, and how to use one to establish the location of “part zero.”


How I Make 3D Printed Parts


Parallax and micro:bit Team Up


The Influence of Literature, Movies, and TV on Robots and How the Hobby has Evolved

The perception of what a “robot” is has evolved over the years.


Make a Spring-Loaded Pen Holder for Your CNC Router for $5!

A pen holder is a nice addition to any CNC hobbyist’s tool bag.


Halloween Props Using the Parallax Activity Board and BlocklyProp

Have a “Spooktacular” time with these simple decorating ideas.

Serious features are packed into this unassuming cube.

Add a servo control trick or two to your embedded systems repertoire.

Review of the Vorpal Hexapod.


Robot Vision for Everyone

HuskeyLens provides vision capabilities many hobbyists have only dreamed of having.


Get Rolling with Omni-Directional Wheels

As omni-directional wheels gain popularity in mobile robots, why not try implementing them in your next build?


Introducing Children to Robotics and Programming

Examine some ways of making robotics exciting for children.


Balancing a Robot on a Ball

Building a robot that balances on top of a ball is easier than you might think.

Frame-based software can be somewhat limited. See what you can do to extend what your walking robot is capable of.


How to “Tram” Your CNC Router

Take a look at what tramming a CNC router means, why you need to tram your machine, and the equipment and technique I use to tram mine.

A primer on RF paths and a useful project to build to go with an SDR receiver.

Model registers “surprise” when objects in a scene do something unexpected.

With the trend for lower 3D printer prices, it makes sense for robot hobbyists to consider ways of using 3D printing in their builds.

Using a simulator for developing and perfecting robot behavior.

Coverage of the 2019 AUVSI trade show.

Examine one option for the hardware and sensor requirements for a two-legged walking robot.

Various ways for a two-legged robot to maintain its balance.

Start your journey into computer-controlled robotics by building a simple arm.


A DIY RC Controller and So Much More!

Investigate the power RC control offers to bring your animatronic characters to life.

Two simple and fun projects to do with your Parallax ActivityBot.

Twin Tweaks
by Bryce Woolley, Evan Woolley
How We Put Double Jeopardy in BattleBots
Making it onto BattleBots takes a lot more than just a cool design.

Then and Now
by Tom Carroll
Service Robots are Knocking on Consumer’s Doors
Someday, the right home service robot will be developed and snapped up by savvy buyers.

Then and Now
by Tom Carroll
Large Robots Over the Years
An evolution of the larger robots used in the military and in space exploration.

Twin Tweaks
by Bryce Woolley, Evan Woolley
Building a Bridge to Anywhere
A look at what you can do with linear motion.

Then and Now
by Tom Carroll
What is a Robot?
How do you define the term robot? It’s not as easy as you might think.

by Matthew Smith
in The Combat Zone

Starting simple with a first robot build for competing.


Maximizing Strength for Printing Combat Robots with a 3D Printer


How Design Revisions Can Make Your Combat Bot More Competitive

by Colin Lesco
in The Combat Zone

Design revisions are an integral part of the engineering process.


An Experimental Approach to Flipper Geometry

Going from no knowledge competing in combat robotics to winning battles.

Taking on a Nightmare of a robot.

Learn the basics of flamethrowers used in combat robots.

by Akhil Padmanabha
in The Combat Zone

by AJ McNamara
in The Combat Zone

A bunch of trials and struggles building a first bot eventually pays off.


The Best Time to Start Your BattleBot’s Career? Right Now!

Wanna get into combat robots? Start with Insectweights.

by Wayne Barber
in The Combat Zone

The story behind my 3 lb Beetleweight.


The Bot of Theseus Or “The Sparadox”

by Steven Pasek
in The Combat Zone

There are two different schools of thought when it comes to dealing with damage to your bots during competitions.


Whiplash 2019: Staying Competitive in the World of BattleBots

Tips on staying in the combat game from a BattleBot’s team.

Girls can be engineers and robot builders too!

bots IN BRIEF (01.2019)
Interesting TidBits From The Robot World.

bots IN BRIEF (06.2019)
Interesting TidBits From The Robot World.

bots IN BRIEF (02.2019)
Interesting TidBits From The Robot World.

bots IN BRIEF (04.2019)
Interesting TidBits From The Robot World.

bots IN BRIEF (03.2019)
Interesting TidBits From The Robot World.

bots IN BRIEF (05.2019)
Interesting TidBits From The Robot World.

Mass Customization: Why Aren’t We There Yet?
by Bryan Bergeron
Discussion of the roadblocks preventing mass customization.

A Renaissance of the Kit Building Era?
by Bryan Bergeron
Rethinking kit design for robotics.

It’s a Great Time to Fly
by Bryan Bergeron
All roboticists should own a drone.

The Failure of Schematic Diagrams
by Bryan Bergeron
Did you ever noticed that, when it comes to sensors, schematic diagrams can be essentially worthless?

Flying Cameras are Driving the Evolution of the Imaging Industry
by Bryan Bergeron
Increased pressure from the flying camera market to create new imaging technologies and to improve existing sensor specifications is the driving force in the industry’s evolution.

COVID-19: Opportunities for D3 Robotics
by Bryan Bergeron
There’s a role for robotics in virtually every dull, dirty, and dangerous aspect of handling outbreaks.

How can automation affect your business?
by Anthony Coggine
Automation basics and applications for different aspects of business.