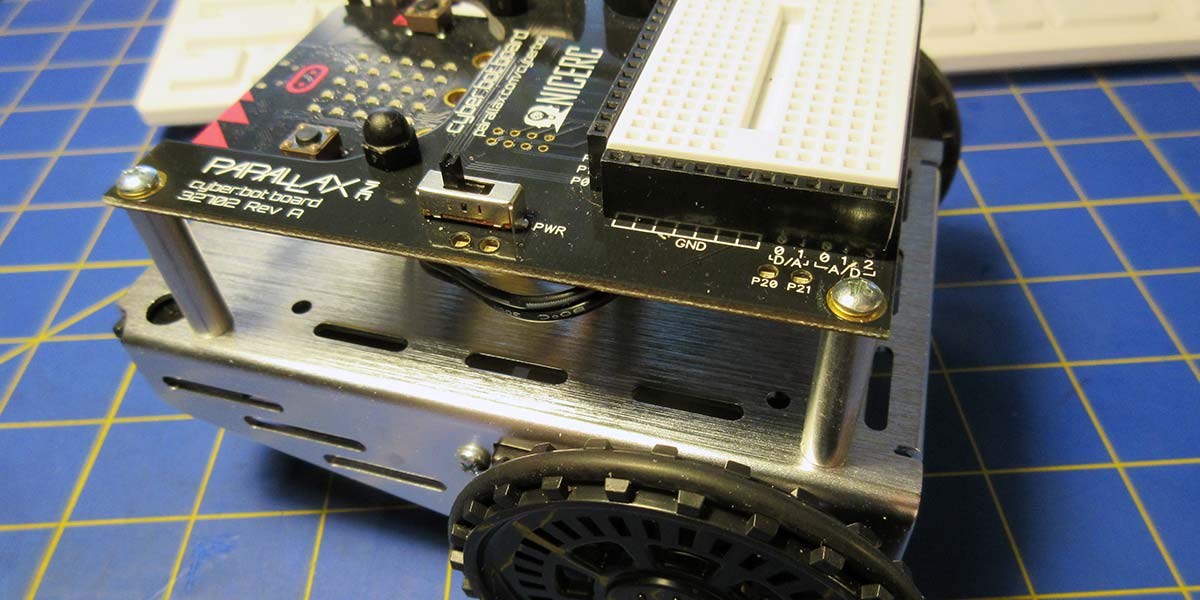 Parallax and micro:bit Team Up

Parallax comes out with a new version of the tried and true Boe-Bot using a micro:bit microcontroller.

Python is one of the fastest growing text-based programming languages in education. By combining the Parallax robot hardware shield and adding a Propeller multicore I/O extender to the micro:bit tiny programmable computer, students will be more engaged with programming using an active robotics platform.

An onboard Propeller multicore microcontroller serves as a co-processor to the micro:bit, handling servo motor control and interaction with breadboard-built circuits for robust projects that go beyond what the micro:bit can do on its own.

The cyber:bot gives students the challenges of programming, electronic circuit building, sensors, power supplies, computers, and competition in the classroom, and the fun of building a robot that responds to their programs.

Pairing the micro:bit with the Parallax Propeller gives the micro:bit extended capabilities that would be hard to do on its own. There is a library and firmware in the Propeller that makes the interface between the two invisible to the user.

The NICERC (National Integrated Cyber Education Research Center; www.nicerc.org) is funded by the Department of Homeland Security and is charged with making a cyber-ready work force with their programs. The NICERC approached Parallax with the idea of using robotics to help teach Python programming.

The robot kit is a small, compact, and very neat looking little robot. It uses the same hardware as all the Parallax Boe-Bot style robots, which is great because these robots are one of the most versatile robot kits on the market.

One of the fun things on the cyber:bot is the LED matrix on the micro:bit board. You can do a lot of things with it, including scrolling messages and moving graphics. A very popular graphic is the beating heart.

Some graphics are pre-loaded in the editor software, but the matrix itself is very easy to program for your own ideas.

When programming, I tend to stick with what languages I’m familiar with and have done my best to avoid having to learn Python.

However, after building and programming this kit, I’m a little bit fonder of it. It’s a very good teaching tool for learning Python.

There are tutorials and interesting projects on the Parallax Learn site (http://learn.parallax.com/tutorials/series/cyberbot-tutorial-series) for the cyber:bot, and literally new ones are being posted every day.

There are lots of little plastic robot bodies for sale on the Internet for the micro:bit, but the only thing they do is run around the room avoiding the furniture. Pairing the micro:bit with the sturdy, versatile, and well-proven Boe-Bot body allows you to do many different things with the robot.

Going through the tutorials, I used whiskers for touch sensing, an ultrasound sensor for distance following, blinked a lot of LEDs, and put QTI sensors on it for line following. I also put a pair of grippers on the front for grabbing things.

There’s a project on the Learn site with instructions for putting a swiveling ultrasound sensor on the front to have the robot find its own way around an area by actively looking for an open path.

Novice or not, you will enjoy working with this robot.

While mostly programmed in Python, the cyber:bot can also be programmed with Scratch.

However, the NICERC is more focused on teaching Python, so they use Micropython and the mu editor. I used the mu editor in programming my cyber:bot and found it easy to work with, giving me a good grounding in using Python.

You will enjoy this pairing of two very powerful microcontrollers! It will certainly help you and your kids learn a language that is very popular in a fun and easy way.

As always, if you have any questions or suggestions, email me at carolhaz391@gmail.com.  SV