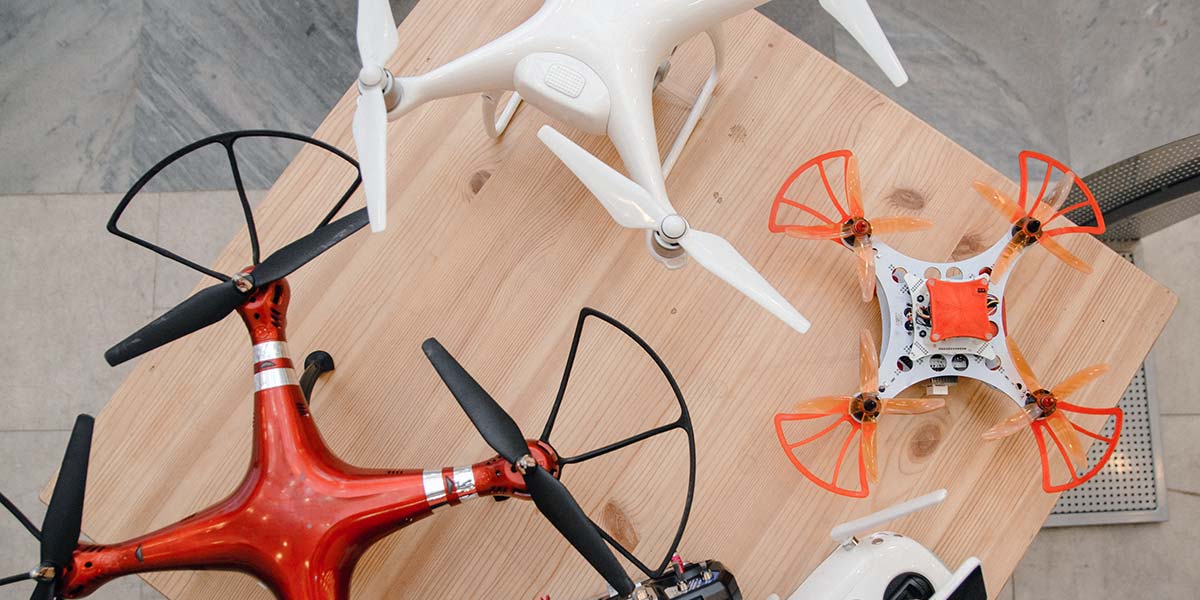 It’s a Great Time to Fly

Given the affordability and accessibility of quadcopters today, no self-respecting robotics experimenter worth the title should be without one. For example, check out the range of quadcopter drones available on Amazon and my favorite offshore source, HobbyKing.com. There are hundreds of drones to choose from, and every one is a learning experience waiting to happen.

Starting at the low end, HobbyKing offers over a dozen drones for $5 or less (plus $20 for International FedEx shipping). However, I’ve found that it doesn’t pay to play for less than $50. In that price category, you can get a full-sized trainer with enough power to stand up to a modest breeze. With another $20 in spare batteries and blades, you should be fine for a month or two.

Unless you have some specific need for a camera, avoid video and still cameras in low-end drones. Picture quality will be poor and so will battery life. Similarly, unless you’re limited to a small apartment, pass on the mini-drones. While inexpensive, their motors tend to be short-lived and virtually impossible to service or replace. Flight time is typically two to four minutes.

At $100, you get a reasonable camera, flight times in the 10-15 minute range, and an ability to remain stationary in a modest breeze. Expect features such as altitude hold and even real time video. You might also find these drones heavy enough to require FAA registration. This $5 tax is applied to all drones that weigh more than 0.55 pounds. If you are less than 13, then a responsible adult can sign for you.

Between $100 and $300, there really isn’t much to choose from that’s significantly different from $100 drones. Around $350 — what I’ll call the mid-tier range — things get very interesting. Higher resolution image-stabilized cameras mounted on gimbals make aerial photography fun. Expect high speed and high altitude capabilities. There’s auto return capabilities, thanks to GPS.

In the $350-$500 range, expect quality brushless replaceable motors, readily available battery packs, and other accessories. Many drones in this price category feature foldable arms, which makes for a much safer and easier transport.

From $500 onward, you get more of the same, with specialization. Much better speed, much better imaging, significantly greater payload capacity, and the like. In terms of learning the nuances of flying robotics, however, there’s little in this price range that you won’t find in the mid-tier range.

I don’t like to mention specific models, simply because the available models and specifications will likely change by the time you read this. However, to ground my suggestions in a real word example, consider the DJI Spark with remote ($399, Amazon). It has a reasonable camera, with 12MP stills and 1080p/30fps video. There’s an impressive object avoidance capability and a top speed of over 30 mph. I’ve never flown it more than perhaps 200 feet from me, but the specs claim a 1.2 mile control range.

I have to travel outside of the city to fly the Spark, so I appreciate the foldable arms. The props also collapse for easy transport, but I think the hinge joints make the props unnecessarily fragile. I’ve gone through more props on the Spark that I have on any of my fixed prop quadcopters. All in all, it’s a very reasonable quadcopter drone for someone with perhaps 20 hours of flying trainer drones under their belt.

Unlike carpet crawlers, aerial drones are somewhat expensive to own and operate. You’ll want several spare batteries, props, and prop guards. There’s also a need for a transport bag so you don’t damage the drone, even if it is folded. Fortunately, the added cost and hassle is more than made up for by the thrill of flying, by watching AI algorithms working in real time, and by finding new uses for your robot.

My latest feat was using the DJI Spark to run a dipole antenna lead up a 70 foot tree — something that I wouldn’t have even considered prior to working with the drone. So, what are you doing with your drone?  SV