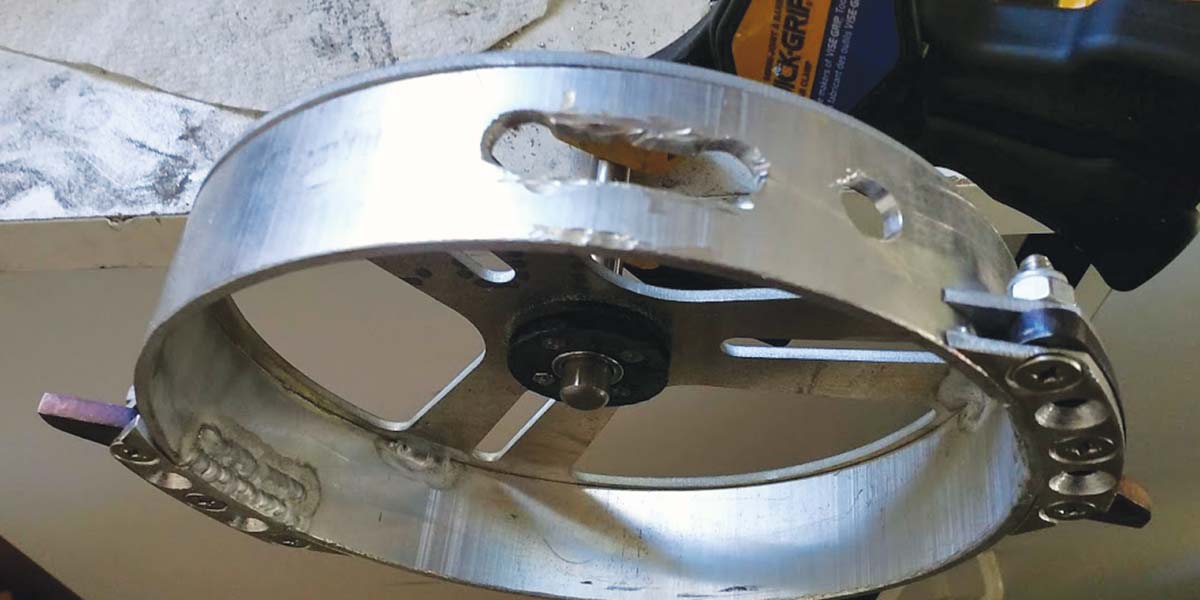 If you’ve ever watched BattleBots™, you’ve probably seen what people call a shell spinner, or full body spinner. The robot’s exteriors are large metal shells that spin at incredible speeds. They vaguely resemble a Roomba that’s been turned into a machine of destruction. Ever since I first saw BattleBots, shell spinners caught my eye. Not only did they look cool, but they could deliver some of the best hits I’d ever seen in the ring.

I’ve always been interested in robotics and had competed in various competitions throughout grade school. Way back in 2015, I learned that smaller scale robot competitions existed not too far from where I lived. A group of my friends and I set out to build a combat robot for the Central Illinois Robot Brawl back in the summer of 2016. Underestimating the difficulty of this task and overestimating our abilities, we did most of the building in the two weeks leading up to the tournament and weren’t finished till the day of. 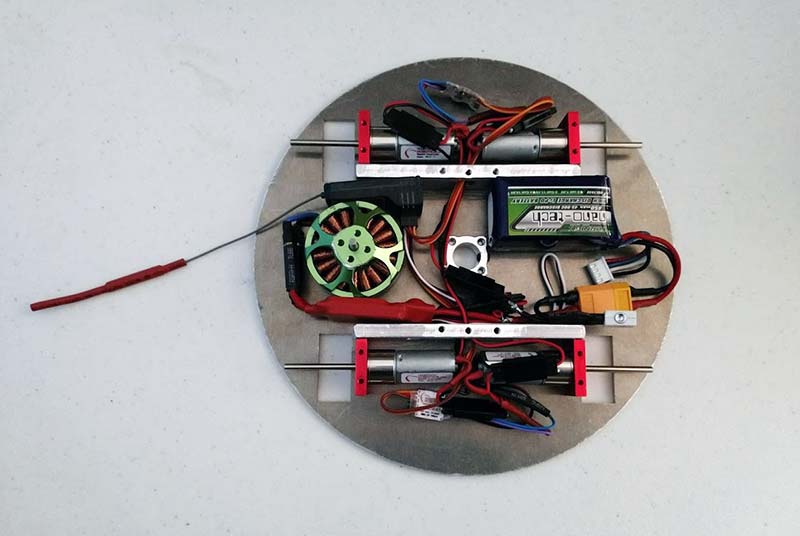 We went winless at the competition, but still had a ton of fun. I was instantly hooked on building combat robots, and I determined I wanted to build a shell spinner like the robots I had admired on TV.

My planning began that fall, but I didn’t really know where to start. The concept itself was simple: Make the outside of the robot spin while the insides stay put. As I soon learned, that task was far easier said than done.

Being the poor student that I was, I settled on building a Beetleweight (3 lb) robot. It would be small enough for the cost to be manageable, but large enough to not making manufacturing and assembly a nightmare. I settled on the name “Vortex” for the robot because of its spinning nature, plus, it was the name of my high school robotics team. 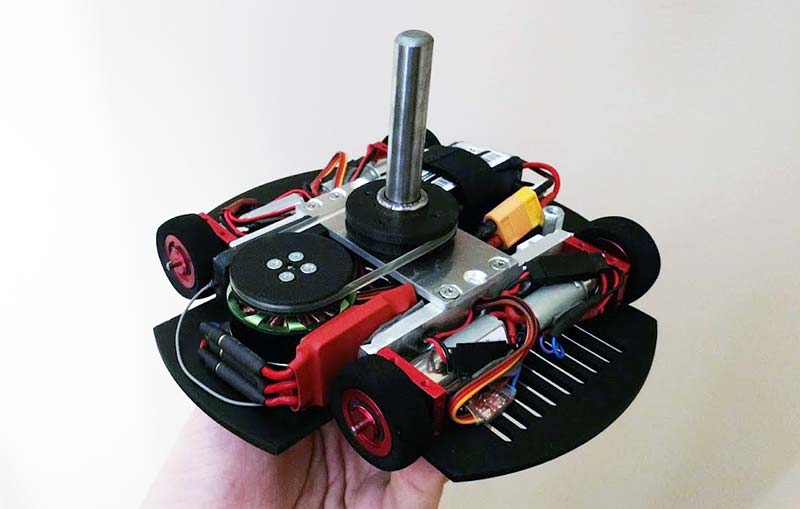 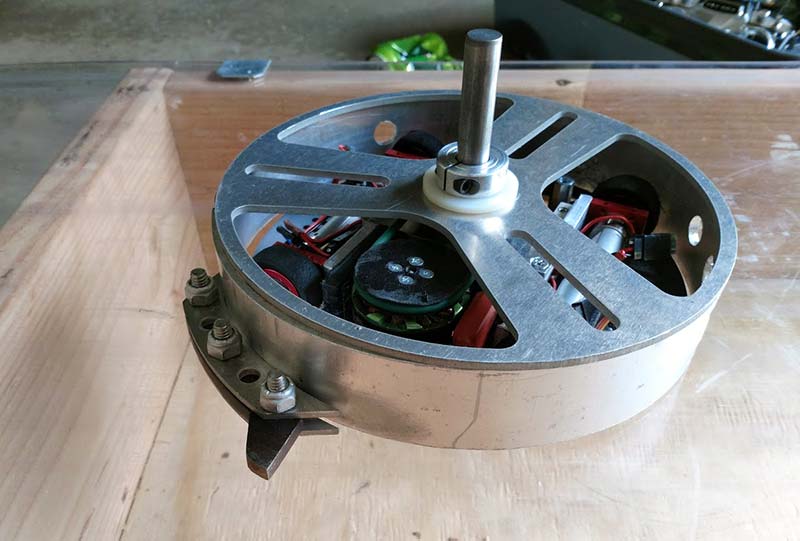 Over the next few months, I had gathered a list of what parts I thought I needed and began to purchase them. Since I didn’t have much access to machining and tools at the time, it was designed around using mostly hand tools and a few parts from a friend of a friend who had access to more advanced tooling.

The robot had an entirely aluminum structure and used a steel cake pan as the shell. Vortex was constructed in the summer and I planned to compete at CIRC 2017. With the robot fully assembled, I wanted to test it out. I turned the controller and the bot on, and started to drive forward.

The robot drove around a bit before my ears were met with the sickening sound of grinding gears. Some screws were incorrectly mounted in the drive gear boxes and the gears had stripped. The competition was only a day away, and I didn’t have enough spare parts to fix the robot in time.

It was a disappointing start to my robot, but I was determined to succeed! I decided it was time to make some major changes to the design. This year, I had access to my college machine shop — a huge resource in my bot-building journey. Aside from the weapon motor, drive ESCs, and battery, everything was new. The heavy metal baseplate got swapped for a custom-cut piece of fiberglass. The parts that were previously cut with a Dremel and drilled with a hand drill were now done with a waterjet and drill press. The cake pan shells were replaced with welded aluminum shells that sported AR400 steel teeth. The robot was finally something I was proud of; it was a miniature version of the bots I had seen on TV.

Vortex — now dubbed version “Mk.2” — was slated to compete at HORD 2018 in June, but in the weeks leading up to the tournament, new-found problems arose.

A few initial tests of the weapon in an impact resistant test box helped dial in the weapon belt tension, but two major problems persisted. The first was the balancing of the shells. A weapon as large and heavy as a shell spinner has considerable rotational inertia, which is how shell spinners store so much energy. Getting the moment of inertia (MOI) to be perfectly in the center is a hard task. Since the shell was made from so many individual pieces, it took a lot of testing and adjustments to get the shell to be stable when spinning.

Most of the stabilization was done by drilling holes in the side of the shell to remove material where it was too heavy. This did leave some un-cosmetically pleasing holes, but the robot no longer wobbled around as long as the throttle was below 60%. 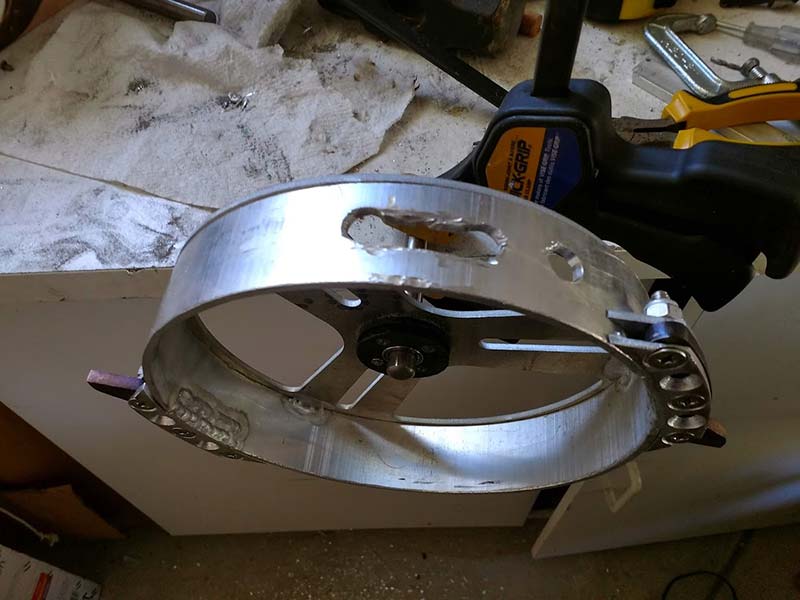 I decided not to turn the weapon speed above that limit; it was plenty powerful enough as-is.

That left only one glaring issue: the batteries. The batteries were one of the few components that I held over from the original robot and retaining them turned out to be a bigger issue than expected.

Originally held in by Velcro™ straps, I soon learned that was far too weak of a solution. In testing, one battery had its connector plug stripped off the wires by the shell, and another had nearly been sliced in half by the shell when the Velcro loosened. The battery was too thick to have a rigid cover placed over it, and no retaining mechanism we had on hand would keep the batteries and all the wires contained. Since the top of the robot was the shell (which had holes to save weight), anything that came loose inside the robot risked being chewed apart by the robot’s own weapon.

At the tournament, the robot ate one more battery in testing. Since the robot had a nasty habit of being close to a LiPo battery fire every time it was turned on, I decided not to compete. The robot was an actual safety hazard. HORD was still fun, and I hung out with my team as they competed. 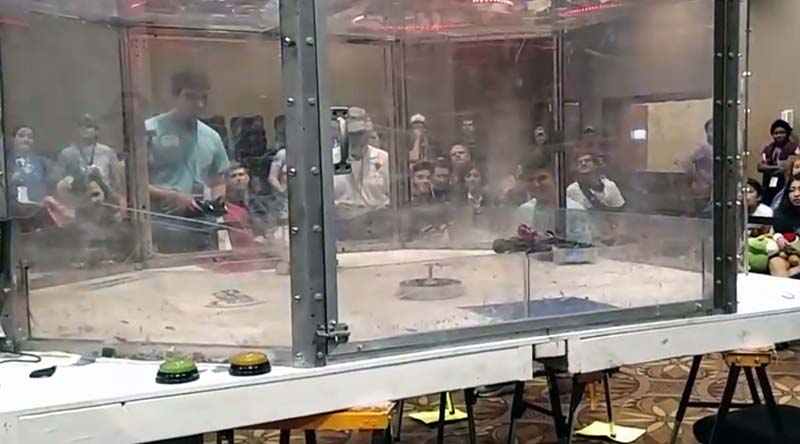 When the time for the rumble rolled around, I decided to give Vortex one last shot. I used every method available to secure the battery inside the robot: epoxy, superglue, gorilla tape, and steel zip ties (thanks to the Russian Winter team). I was approved to enter the Beetleweight rumble, which is a giant free-for-all at the end of the competition.

After delivering a few good hits in the rumble, one of the weapon motor wires shorted out. With the drive still functional, I was able to push and take damage for the duration of the match. When the five minutes were up, Vortex was one of two robots still moving. The crowd voted for the other robot to win because he pushed more opponents into the pit, but I still considered this a great success for the robot. It showed that Vortex could take hits from other robots and stay on its wheels.

The next competition was CIRC 2018; the tournament that had started it all. However, a few upgrades were planned before then. The bearings were upgraded for more stability, and new batteries with a 3D printed plastic clip were added. Perhaps most important though, Vortex got a new paint job. Black with electric green stripes to make the robot look sleek. 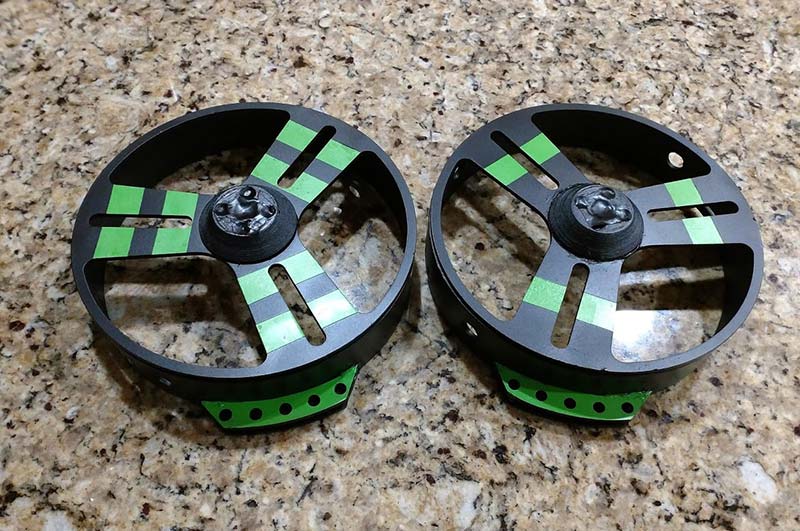 Vortex arrived at CIRC fully functional and ready to rock for the first time. In its first real match, Vortex faced off against Tidal Wave: a blue drum spinner with two large wheels. Vortex delivered some great hits. It ripped the drum off the opponent robot and knocked it out in only 26 seconds. After two years of development, Vortex won its first match. I was through the roof with excitement.

Hot on the heels of this success, I prepared to face off against my next opponent, Ele-Flip: a robot with a plow for lifting opponent robots. The first few hits knocked Ele-Flip around quite a bit and pulled the plow loose from the robot. In just under a minute, Ele-Flip was immobilized, and Vortex had its second knockout of the day.

The next match, however, would break Vortex’s streak. Vortex faced off against Sparrow: a D2 wedge robot. Vortex was knocked into the pit after getting caught on Sparrow’s wedge. A disappointing way to go out, but Mario from Team Sparrow had played very well.

Finding myself in the loser’s bracket, it was win or be eliminated at this point. My next opponent was Chunky Monkey: another D2 wedge kit. The match started alright, and Vortex did get flipped upside-down for the first time, but the self-righting arm worked perfectly, and Vortex got back on its wheels. Ultimately, however, Vortex faced the same fate as before. With a few seconds to go in the match, Vortex was knocked into the pit, giving the win to Chunky Monkey.

It was a bit disappointing, but going 2-2 at its first competition wasn’t horrible. Plus, the rumble was still to come. The rumble was a chaotic four minutes; Vortex’s shell died in the first 20 seconds, and at some point, the top of the shell and the ring came completely apart, but the bot battled on. After a few robots got knocked into the pit and several of them lost mobility, there were only a few robots still able to move.

With two minutes left, only Vortex and a horizontal spinner named Ataxia were alive. The two robots battled to win the rumble, with Vortex’s shell taking blow after blow from Ataxia’s blade. With 11 seconds remaining, Ataxia bounced off Vortex and flew into the pit. Vortex had knocked out at least four robots, but more importantly, it had survived. My shell spinner that had been such a long series of trials and struggles had won a rumble. 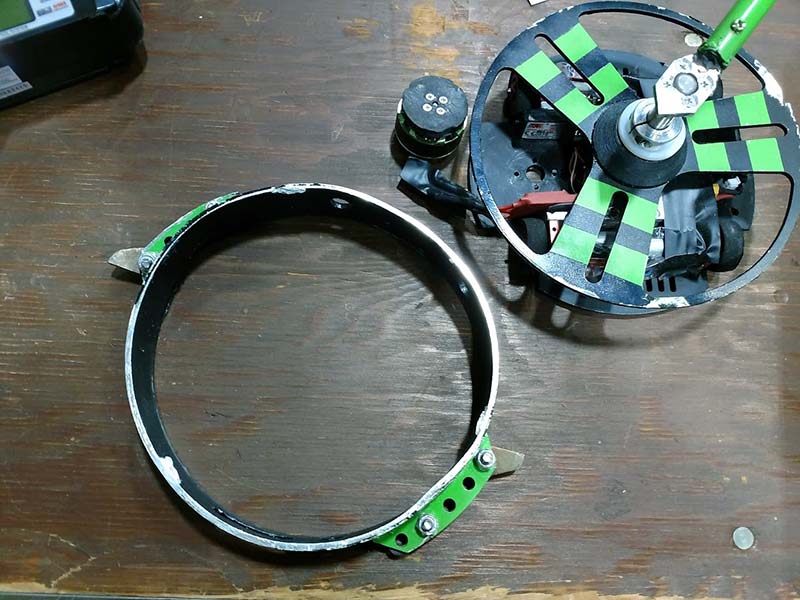 Vortex after the rumble.

It’s been a long journey to get a shell spinner working, and I’ve learned a lot along the way. I can hardly wait to make more upgrades and get back in the ring! I liked shell spinners when I first saw them on TV many years ago, and after building my own, I love them.  SV