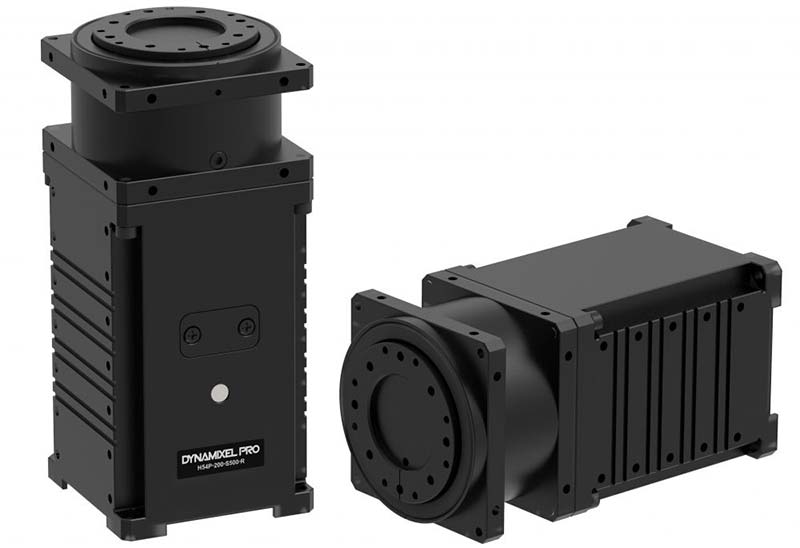 Some of the improved features of the new DYNAMIXEL Pro Plus include: 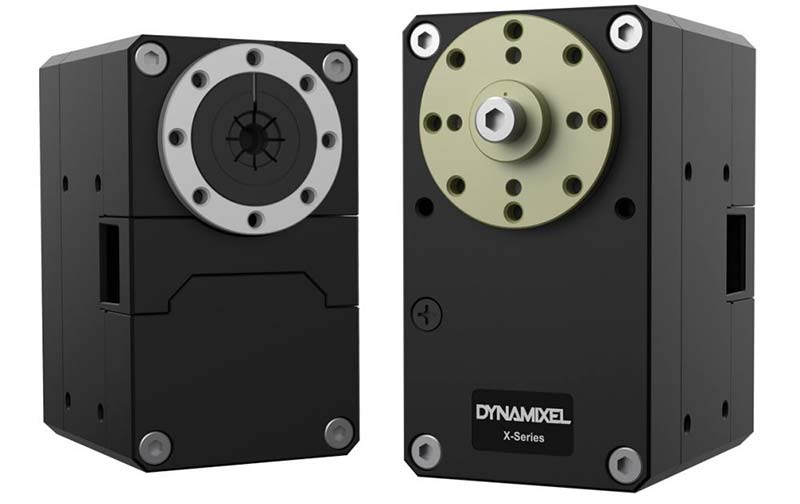 The DYNAMIXEL X-Series is a new line-up of high-performance networked actuator modules, which have been widely used for building multi-joint robots with reliability and expandability. The DYNAMIXEL XM540-W270-T is priced at $349.90

The DYNAMIXEL XH/XM series offers a variety of control techniques based on high-performance current sensing algorithms. It adopts the aluminum case and adopts the new technology such as the hollow cable fastening structure for user’s convenience.

Pololu’s second generation of Jrk motor controllers with feedback is now available. With integrated support for analog voltage or tachometer (frequency) feedback, the Jrk family of motor controllers makes it easy to add closed-loop control of speed or position (but not both) of a single brushed DC motor to a wide range of applications.

These versatile general-purpose modules support a variety of high-level control interfaces: USB for direct connection to a computer; TTL serial and I²C for use with a microcontroller; RC hobby servo pulses for use in an RC system; and analog voltages for use with a potentiometer or analog joystick.

The Jrk G2 motor controllers also offer many settings that can be configured using Pololu’s free configuration software utility for Windows, Linux, and macOS. This software simplifies initial setup of the device and allows for in-system testing and monitoring of the controller via USB. 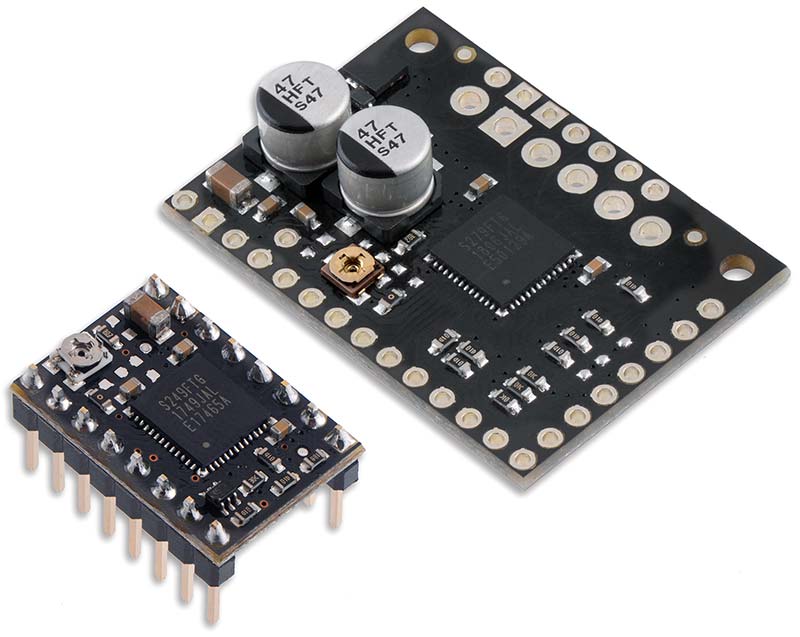 Pololu also announces the release of carrier boards for Toshiba’s new TB67S249FTG and TB67S279FTG bipolar stepper motor drivers (the only difference between the two is the maximum current supported). In addition to typical features such as configurable current limiting and microstepping down to 1/32-steps, these new products offer several innovative features that set these drivers apart from the multitude of integrated stepper drivers currently on the market.

One particular new feature is Toshiba’s Active Gain Control (AGC) which automatically reduces the stepper motor current below the set limit based on the actual load on the motor, allowing for reduced unnecessary heat generation and higher peak power when the motor actually needs it. The drivers also incorporate Toshiba’s Advanced Dynamic Mixed Decay (ADMD) technology which dynamically switches between slow and fast decay modes based on the actual motor current, providing higher efficiency and smoother steps at high speed than you get with traditional timing-based mixed decay.

Two carrier boards are available for each driver chip: a larger module that provides access to all of the integrated circuit’s pins so you can test all the features it offers; and a compact carrier in the popular 16-pin 0.6” x 0.8” Pololu form factor, which makes it easy to use the new drivers on RAMPS-type 3D printer controllers that have the compatible sockets.

Both the TB67S249FTG and TB67S279FTG have the same wide operating voltage range of 10V to 47V, and on the compact carrier boards, they can respectively deliver continuous currents up to 1.7A and 1.2A per phase (4.5A and 2A peak) without additional cooling.

The maximum current is slightly higher on the larger carriers because of the better heat dissipation due to the increased board size. The drivers feature a built-in regulator so no external logic voltage supply is needed, and they can interface directly with 3.3V and 5V systems.

The compact carriers have single-piece pricing starting at $9.95 for the TB67S249FTG and $7.75 for the TB67S279FTG, and they are available with or without header pins soldered. The larger full breakout versions are $11.95 and $9.75 each in single-unit quantities. 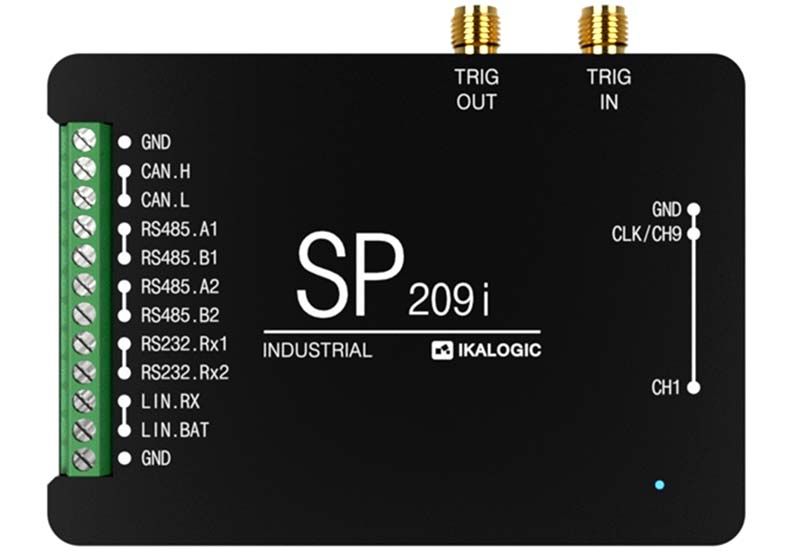 Saelig Company, Inc., has introduced the Ikalogic SP2 series of compact nine-channel 200 MHz logic analyzers which offer in-depth analysis of logic signals and protocol decoding with 200 MHz (5 ns) timing resolution. The nine-channel design allows eight-bit parallel data to be captured along with a clock or strobe signal at the maximum sampling rate without any trade-off between the number of active channels and the sampling rate.

This is possible due to an embedded 2 Gb memory that buffers the captured signals before sending to the attached PC. Powerful trigger options are provided including: edge trigger; logic change on one or various channels; trigger on timed logic signals sequence; trigger on protocol word or event (e.g., serial word or I2C address acknowledge); external trigger input; etc. The SP2 series makes it easy to analyze CMOS logic signals and industrial busses. The series consists of two devices: the SP209 ($399) is the standard edition; and the SP209i ($519) is an industrial version with specialized receivers for most common industrial busses like RS-485, RS-232, or CAN.

The Trigger-in and Trigger-out SMA connectors allow users to synchronize the SP209 to other lab equipment, building highly sophisticated test setups. The Spartan 6 FPGA design provides the processing power required and can easily be firmware-updated. The SP2 series logic analyzers use the supplied ScanaStudio software (Windows, Mac, and Linux) to capture, display, analyze, and decode signals. Most industry standard protocols can be decoded, including: SPI, I2C, USART, 1-Wire, CAN, LIN, RS-232, RS-485, TWI, and more.

The software allows users to capture very long sequences of logic signals (up to 2 Tera samples), or view decoded signals in various levels of abstraction (packets or detailed bits and bytes). It also enables targeting very specific events due to the versatile multi-stage trigger system.

The SP2 series logic analyzers compress and stream captured signals via USB 2.0 to an attached Windows, Linux, or MacOS computer. USB bandwidth can be variable from system to system, with a practical limitation of 20 MB/s. SP2 logic analyzers have an embedded 2 Gb DDR-3 memory which buffers captured samples at 1.6 GB/s to avoid these USB limitations. Features include: