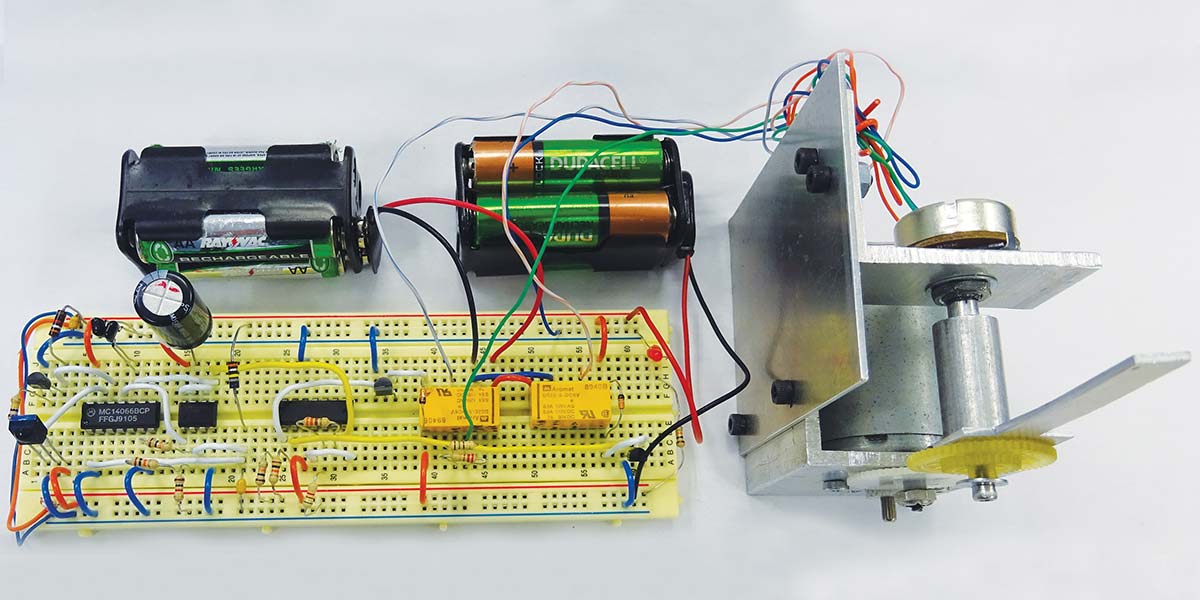 A Quick Experimenter’s Guide to Servomotors

Servomotors, for the most part, are a joy to work with. They make it possible to precisely control the motion of a motor and are indispensable in robotics, radio control planes, and cars.

If you’ve ever taken one apart, you’ll find it to consist of a gear motor, potentiometer, and control electronics. Figure 1 is an example of a home-built servomotor without the electronics. As you can see, the motor is connected to the potentiometer through a series of gears. 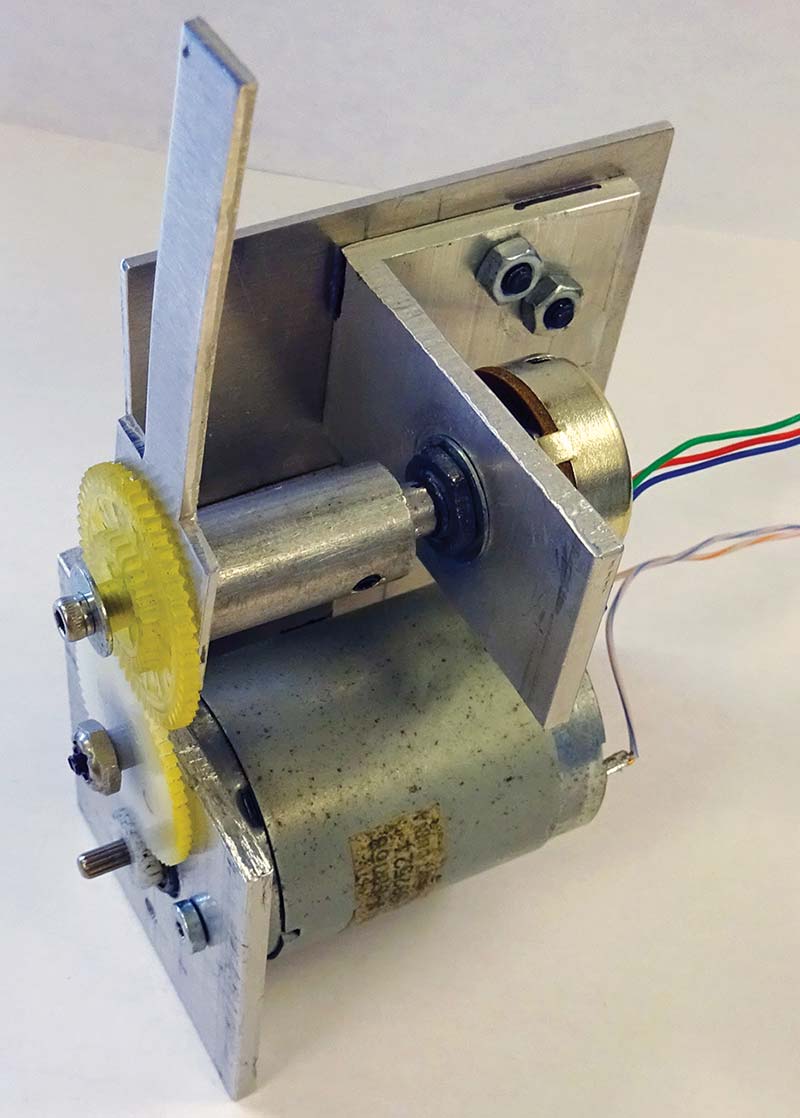 Small DC motors run very fast, but have very little torque. By adding a reduction gear (small gear on the motor shaft), you increase the rotational force or pulling power of the motor. The potentiometer is used as the sensing transducer to measure the position of the motor. 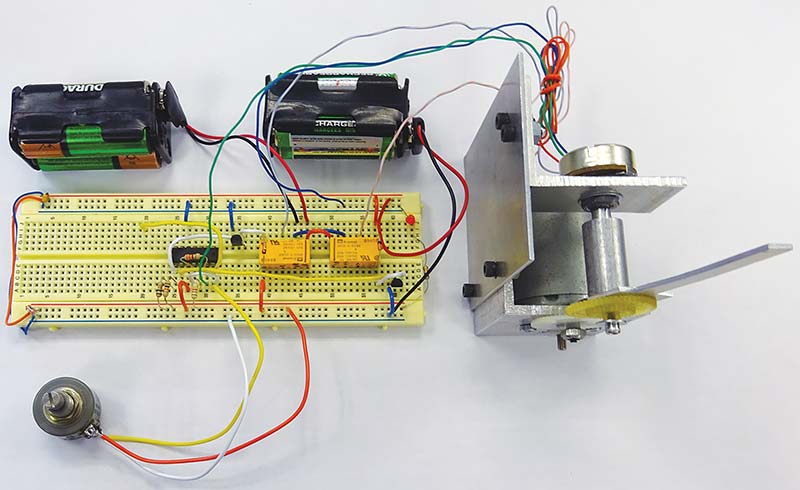 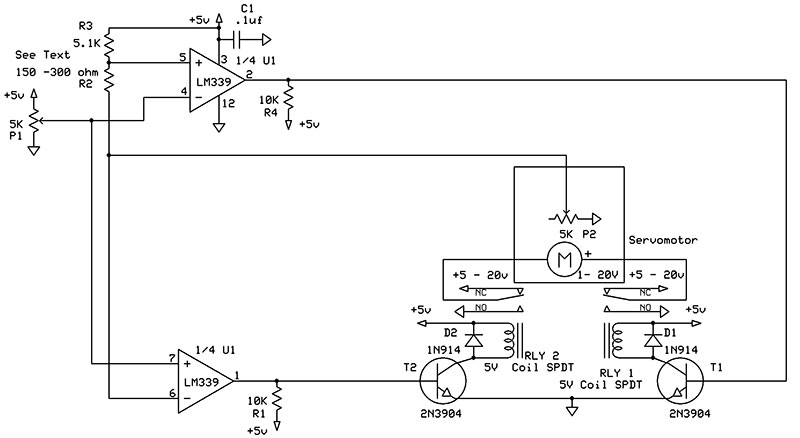 Since the relay switches are set up in an H configuration, energizing one relay will cause the motor to go clockwise and the other counterclockwise. As you may have noticed, I used a relay H-bridge instead of a MOSFET and separated the power supplies. There are some definite advantages to doing this.

You eliminate motor noise that can cause the circuit to oscillate and, more importantly, you can easily change input voltage up to the specified limit of the relay. This becomes handy when you need to use either a very small motor which runs on low voltage or a large one for torque that requires a higher working voltage.

R2, R3, and P1 provide the window. R3 can be anywhere between 150-330 ohms and is somewhat dependent on your application. By decreasing the value, you will decrease the size of the window and stiffen the motor’s reaction time, though too low a value can cause it to oscillate.

If you add an arm to potentiometer P1, you can make a rudimentary joystick that can manually control a robot arm very effectively. Since there aren’t any mechanical stops and the gear ratio can be optimized for any application, movement from 0 to 360 degrees is possible. Most toy servomotors have mechanical stops at 0 and 180 degrees to prevent damage to the gears.

If you build this circuit and are sure that your wiring is correct but find the circuit doesn’t work properly, reverse the plus and minus leads on the servomotor potentiometer or motor leads. This circuit is polarity sensitive.

The motor potentiometer and the motor must run in the correct direction relative to the input potentiometer. If it doesn’t, the voltage drop across the potentiometer may go up when it should go down or vice versa. The comparator will receive the wrong information and the circuit will work incorrectly, causing the motor to slam the potentiometer into the extreme left or right position. 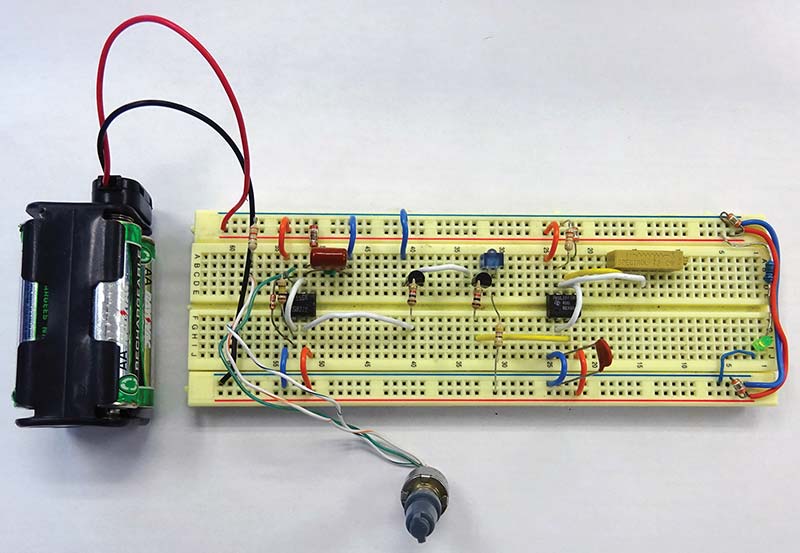 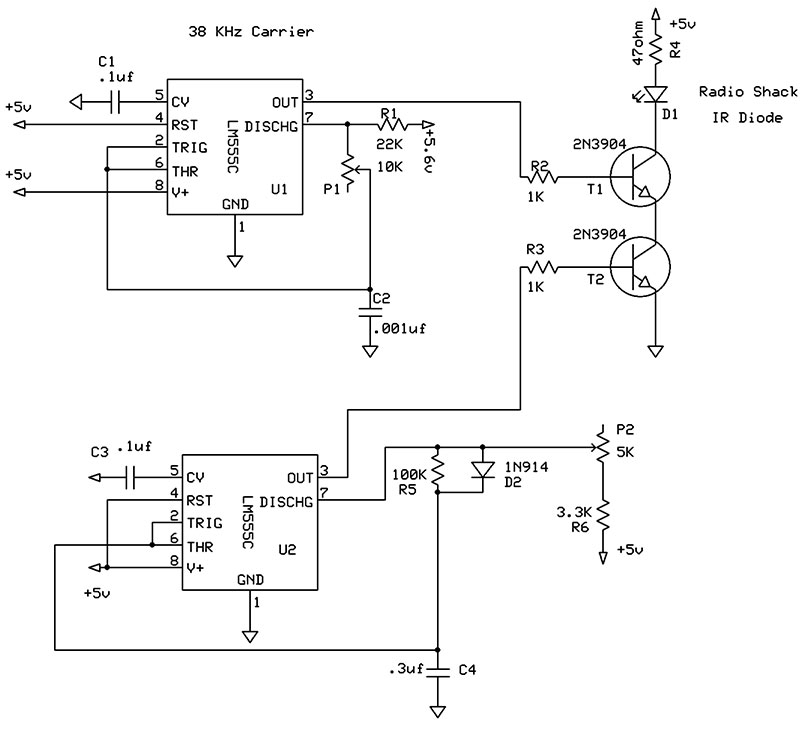 The transmitter operates by modulating a PWM signal with a 38 kHz carrier. This signal is then demodulated by the infrared receiver module mentioned later in this article.

I used a 555 timer to generate the PWM signal. To do this, the charge and discharge times need to be designed independent of each other. This is made possible by the 1N914 diode. With the diode in parallel with the 100K resistor, capacitor C4 can only be charged through the 3.3K resistor/5K potentiometer combination.

By varying the resistance of the potentiometer, the length of the pulse can be varied from 1 to 2 ms. Since C4 can only be discharged through the 100K resistor, the off time is fixed at approximately 18 ms. By varying the value of C4 from .3 µF to .4 µF you can control the rotation of the servomotor from 90 to 180 degrees.

The receiver circuit consists of an infrared receiver module that amplifies and demodulates the transmitted signal, and a PWM to voltage converter that feeds the servomotor comparator circuit.

Most any IR receiver module will work; I’ve used discarded TV, VCR, and even IR helicopter modules as long as they can receive a 38 kHz carrier and a continuous signal.

You may also have noticed I used Ni-MH rechargeable batteries to run these circuits instead of alkaline. Alkaline versions have a higher operating voltage which might damage the IR receiver module.

For clarity, I broke up the circuits into parts. After the IR receiver module demodulates the PWM signal, it’s converted to a linear ramp as shown in Figure 4. 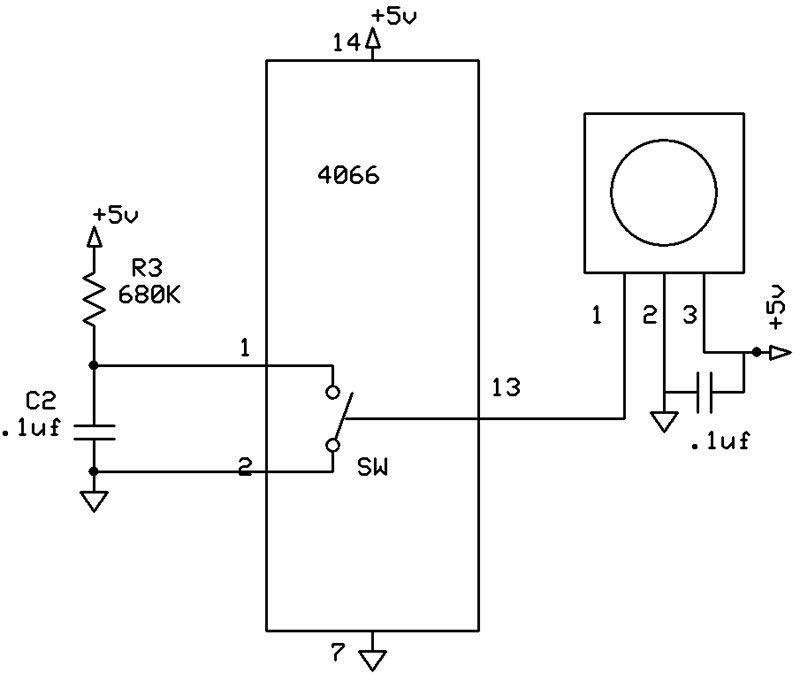 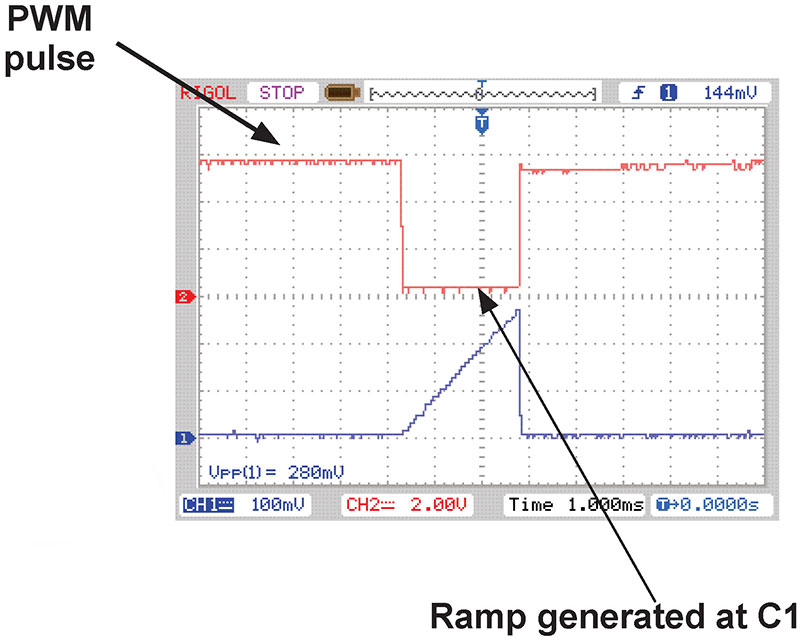 A low pulse from the IR receiver to pin 13 of the 4066 Quad Bilateral switch forces it to open, allowing .1 µF capacitor to charge through the 680K resistor, producing a linear ramp.

A non-inverting amplifier with a gain of 20 amplifies the ramping voltage to a useful level. To convert the ramp to steady DC voltage, the peak voltage must be stored for a short period of time. A ramping voltage would cause the circuit to oscillate.

To do this, a simple sample and hold circuit was used as shown in Figure 5. 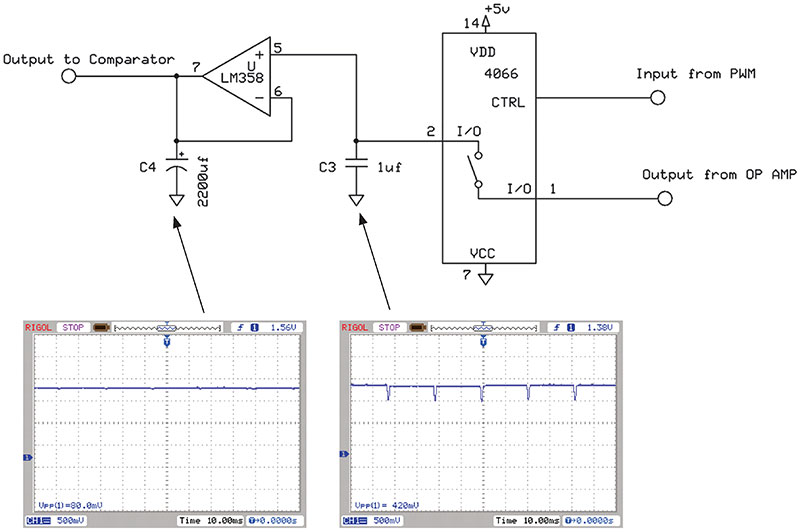 A sample and hold circuit is used to catch a brief input voltage and store it until the next sample cycle. The circuit consists of a high impedance op-amp and a CMOS switch. When the switch closes, the capacitor rapidly charges to a new voltage.

Opening the switch captures this voltage and the high impedance of the op-amp keeps this voltage from decaying during 18 to 19 ms between pulses.

To remove the slight spike caused during the charging of C3, capacitor C4 was placed at the output of the op-amp. This produced a relatively smooth DC output that varies proportionally with the width to the PWM input. The conditioned signal is then fed into the servo circuit as described back in Figure 3.

For such a simple circuit (Figure 6), it performed admirably when tested next to a commercial unit. The mechanical aspects of the servomotor were tough and reliable. 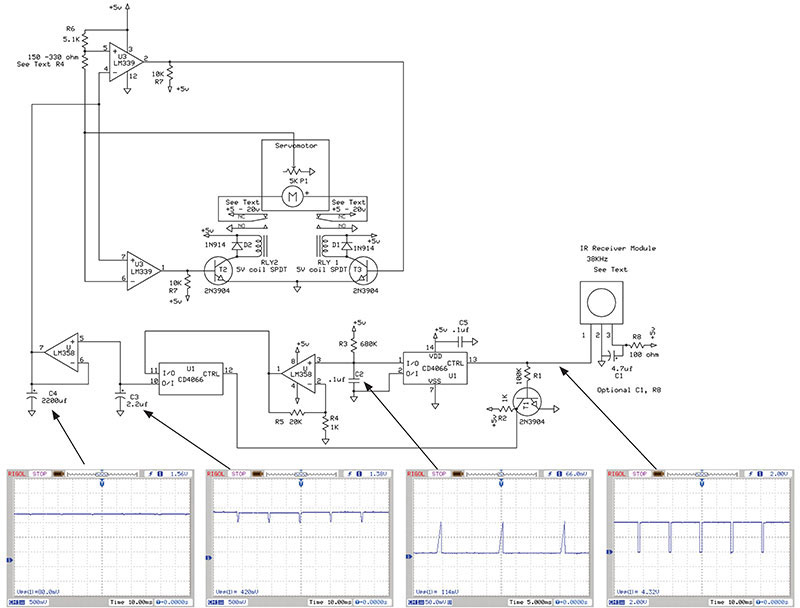 I hope this article serves you well.  SV