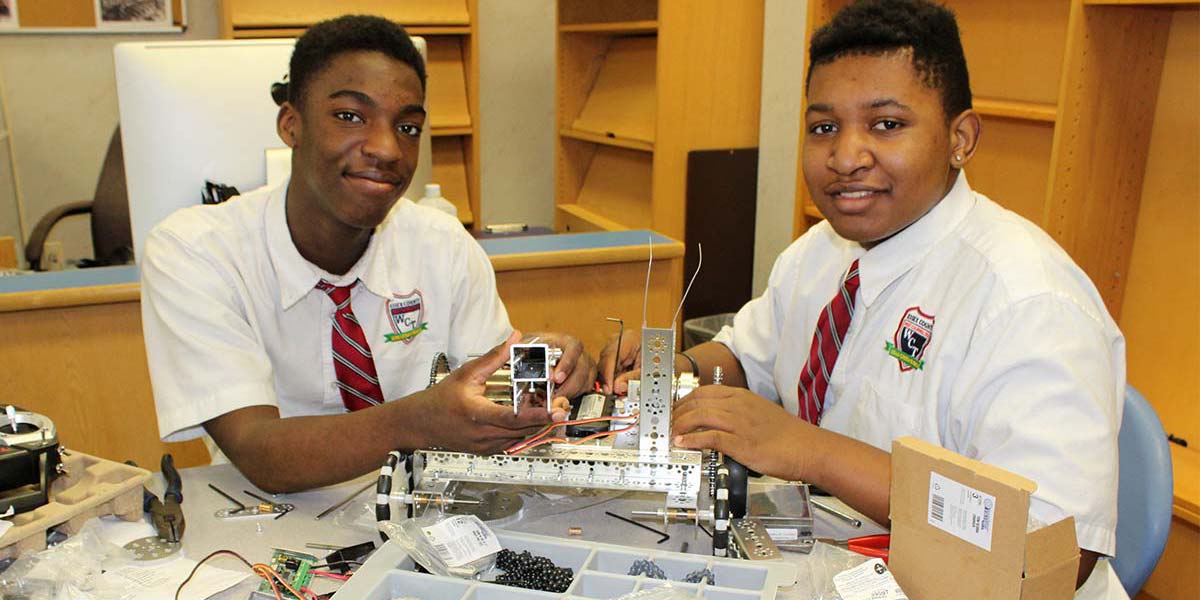 Building a Future One Robot at a Time

When Justin began high school, studying was not high on his list of priorities. “When I first started at West Caldwell Tech, I wasn’t serious about school,” he admits. “I did just enough to get by.” His classmate, Marquis, was equally unmotivated. “My freshman year, I can honestly say that I didn’t put in as much effort as I feel I should’ve. When I came into high school, I really felt like, as a student, it’s kind of, ‘Whatever. I don’t have to put in that much work.’” Three short years later, both young men — now preparing to enter their senior year at West Caldwell Tech in Essex County, NJ — have become leaders and examples of what can be accomplished through hard work and commitment.

So, what changed these previously unmotivated students into hardworking seniors ready to take on the world? The patience and dedication of a caring teacher ... and some engaging robotics.

Robert Lorenzo, West Caldwell Tech’s engineering instructor and robotics coach, has been teaching students like Justin and Marquis since 2008. In the Essex County School District (where Lorenzo is now teaching at his third school), more than 85 percent of the students qualify for free or reduced lunch. More than 90 percent come from some of the lowest socioeconomic districts in New Jersey. 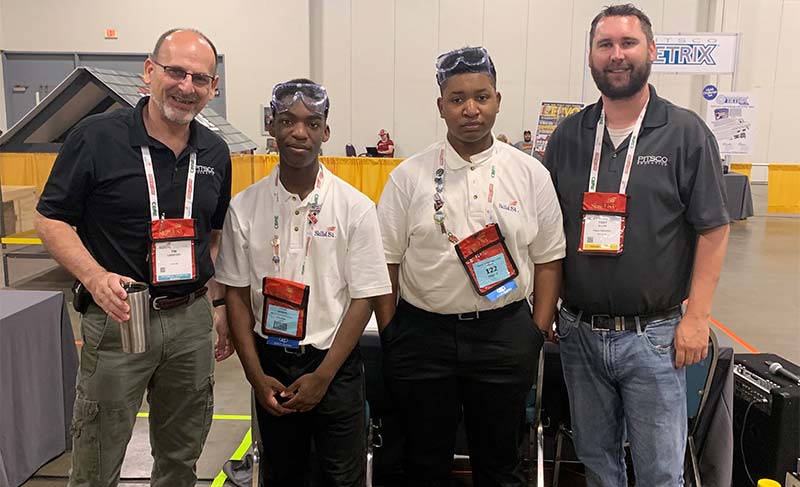 None of that fazes Lorenzo because he used to be one of those students. “I had a troubled youth,” he explains. “I had it pretty hard growing up, so I identify somewhat with our students. I also struggled as a young teen to find myself academically, so I understand their struggles, and I really enjoy helping them overcome those hurdles and find success.”

He also demonstrates to his students that, regardless of how they might act out, he’s going to be there for them. “These kids, they’re used to arguing with the teacher, and the teacher responds by just shutting [them out]. I’m like, ‘You just did the wrong thing. We corrected your behavior; we’re moving on. That was five minutes ago. What’s the answer to this question?’”

Along the way, Lorenzo also discovered the lure of robotics. “I was sitting in the classroom just wondering how I could engage students,” he recalls. “And I was Googling something along the lines of after-school activities to engage students in science, and FIRST (For Inspiration and Recognition of Science and Technology) popped up.” Now all Lorenzo had to do was get his students to like robotics. 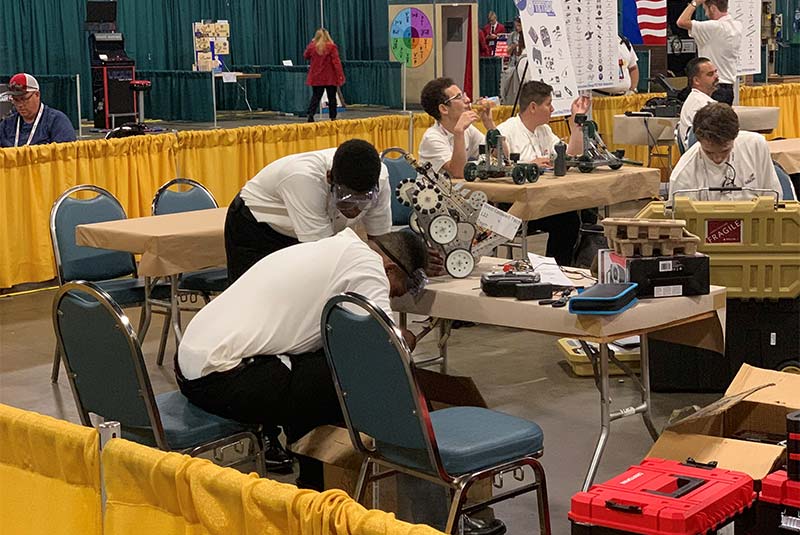 To drum up interest, he brought in a remote-controlled helicopter and flew it around the school. “The kids saw that, and it just kind of roped them in,” he says. As soon as students built and began operating their first robot, there was no shortage of interest.

More importantly, it’s a great equalizer. Students from all walks of life can learn to build, code, and operate robots. The connections to various STEM (Science, Technology, Engineering, and Mathematics) subjects and careers provide eye-opening aha moments, regardless of what a student’s background is. Watch two students from two different backgrounds put together their first robot, and you’ll see the same reaction from both students: a sense of pride, accomplishment. A sense of purpose.

That’s what Lorenzo sees when his students work with robotics sets such as PITSCO’s TETRIX PRIME and MAX. And that’s what he uses to motivate and encourage them, to get them to see there’s a promising future ahead of them if they just work hard. “I have a phrase on one of our whiteboards that says, ‘Building a future one robot at a time,’” he noted. “It’s always about more than robots.”

From Intimidation to Success

The road wasn’t always easy for Lorenzo’s teams. At his first school, he started a FIRST Robotics Challenge team. “We lost most of our matches that year,” he says. “We were ranked like 30-something out of 60 some odd teams.”

However, once the students saw some success, things started to change. “After winning a couple times, they really built tremendous self-confidence and self-worth,” says Lorenzo.

Lorenzo and his teams eventually moved from the FIRST Robotics Challenge to the FIRST Tech Challenge, where their success continued, eventually reaching its eastern super regional during the 2018-2019 season. Just this past year, the team added another competition to their repertoire: SkillsUSA Robotics: Urban Search & Rescue (USAR), after the New Jersey National Guard introduced them to the challenge and loaned them a TETRIX kit to use. 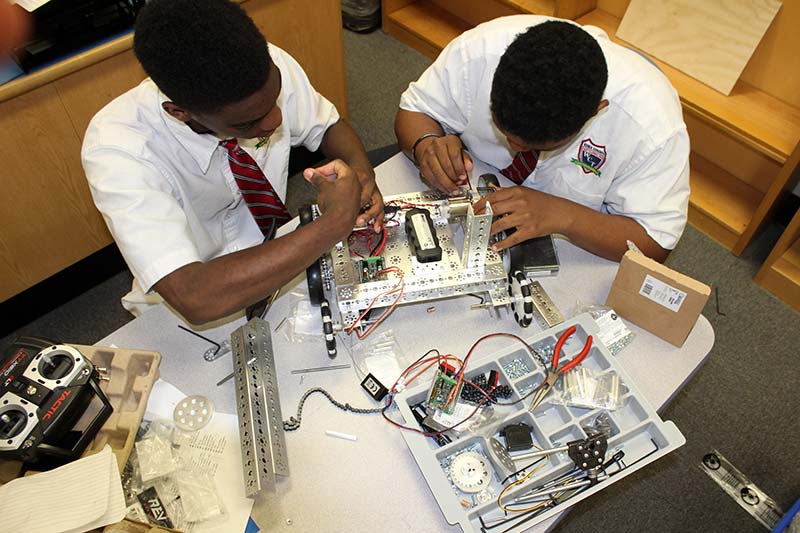 Coming into high school with a lack of motivation, Marquis, left, and Justin are going out with thoughts of working in the robotics and engineering fields thanks to their experience in SkillsUSA® Robotics: Urban Search & Rescue.

A Future Worth Building

Marquis and Justin, who came in as unmotivated freshmen, who didn’t want to work together — didn’t even like each other — but got thrust together on a USAR team anyway, overcame their differences, worked as a team, and won the New Jersey USAR event, earning themselves a spot in the nationals.

Marquis and Justin now see themselves as strong, capable students, leaders, and — most importantly — as future engineers.

“Robotics taught me how to focus on success,” says Justin. “If not for my mom, dad, teachers like Mr. Lorenzo ... and classes like robotics, I don’t know if I would have been the kid working at a 4.0 level right now.”

“Doing robotics has brought a new passion to me, something I have to work for,” says Marquis. “I feel like what we get fed is that the only way to make money or become successful is by making music or being an athlete. But there’s so much that’s left on the table with engineering. Why can’t I do something [like engineering] where I actually have a real future and an actual chance at it?”

One dedicated teacher. Capable, hardworking students. Add robotics to the mix, and there’s no telling what the future holds.  SV

USAR: Start Your Own Team!

Interested in starting up your own team? Robert Lorenzo is more than happy to share what he’s learned about starting up and maintaining a robotics team. Anyone interested can email him at rlorenzo@essextech.org.