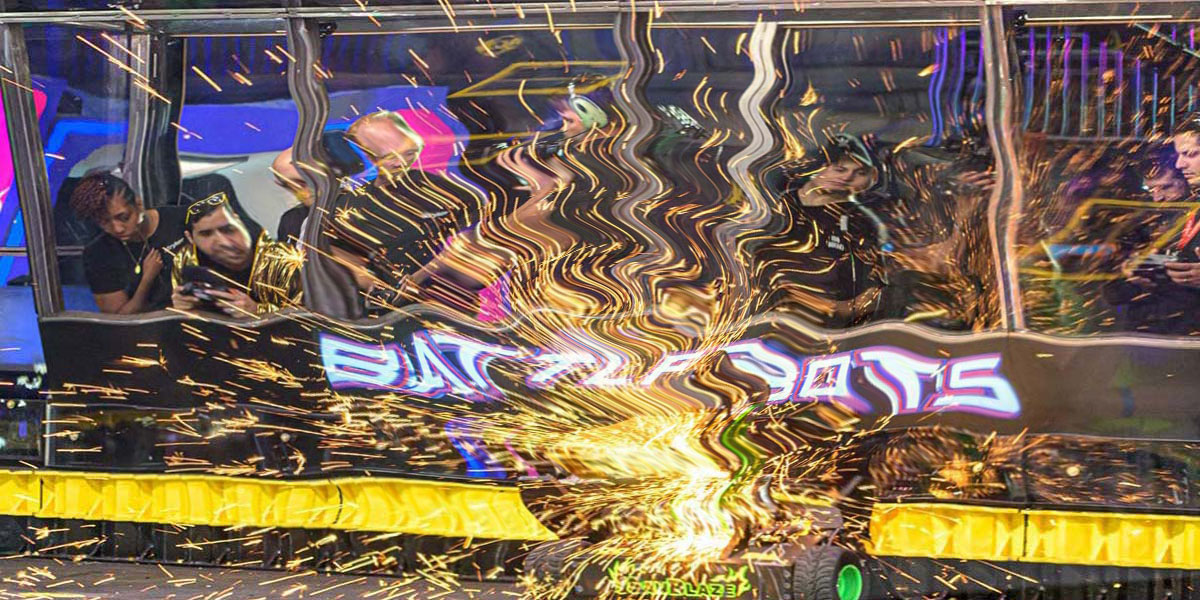 The Best Time to Start Your BattleBot’s Career? Right Now!

Combat robotics is becoming the most popular STEM-based competition in recent memory. Many people are enthralled by the heavy hitting and flashy sport as seen on the television show, BattleBots™. Many wonder how they can get into the robot building scene, but are discouraged once they realize how daunting a 250 pound competition robot is to build.

However, what you might not know is that almost no team you see competing on BattleBots started out in the 250 lb class; many of the competitors you see on TV started out in lower weight classes by building one or three pound “Insectweight” robots. 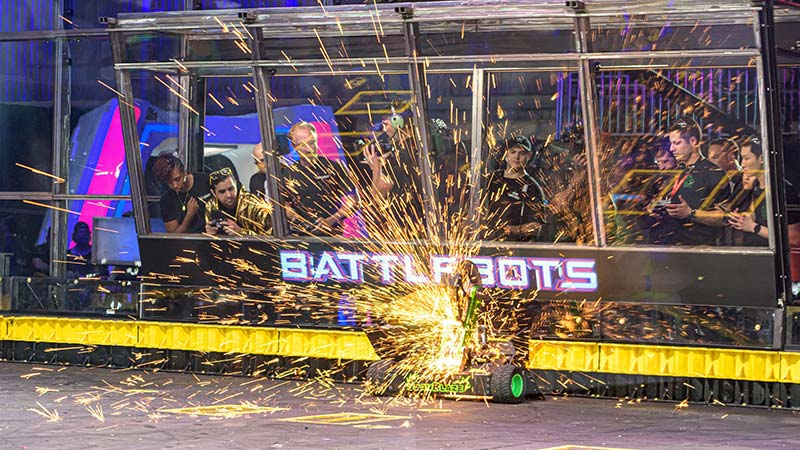 A shot from this year’s season of BattleBots. Pictured is MIT’s own “Sawblaze.”

In this article, I’ll be covering the reasons I think you should join the pros by jumping into the rapidly-growing combat robotics scene with Insectweight robots.

Building your first robot will be a challenge. However, I’ll cover a few of the resources you can use, what you can expect from your early competitions, and — most importantly — how the Insectweight classes can teach people of any age engineering and design processes while having a load of fun.

Due to the revival of the TV show, BattleBots, many new builders are entering local competitions, and leagues are expanding to new cities as a result.

This makes now a better time than ever before to get into combat robotics, since chances are there’s a competition close to you.

There are some misconceptions about getting into combat robotics that may turn people away from building their own bot. One of the biggest concerns is how difficult combat robots are to build. While building any robot can seem complex, Insectweight robots provide an easier entry into the sport.

The one pound Antweights and three pound Beetleweights provide an achievable way to start your journey up the combat robotics ladder. There is no programming needed in the large majority of Insectweight robots and the wiring is the exact same as it would be in an RC car.

The skill floor to enter combat robotics is lower than most people think, but there is no skill ceiling. This allows for a large amount of growth in design and engineering skills, making combat robotics a perfect STEM-related sport for students, families, or even schools to get into.

Teams that have access to only a drill and a saw can build a brick of a robot out of UHMW plastic that can survive the most well-engineered spinners if properly designed. If you are more computer inclined and have access to a 3D printer, you can use the free CAD software Fusion360 and print out an entire robot chassis.

A 1 lb or 3 lb 3D-printed robot can be extremely competitive when using high-end 3D printer filaments like nylon or onyx.

If design work really isn’t your thing and you just want to get into the sport immediately, you can go out and buy entire premade robots or weapon kits from websites like botkits.com or FingerTech Robotics. BotKits has an admittedly annoyingly good “D2” 3 lb wedge bot and FingerTech has an amazing 3 lb weapon kit called the “beater bar,” as well as an amazing 1 lb robot called “The Viper,” which has helped nearly 2,000 people get into the sport already. 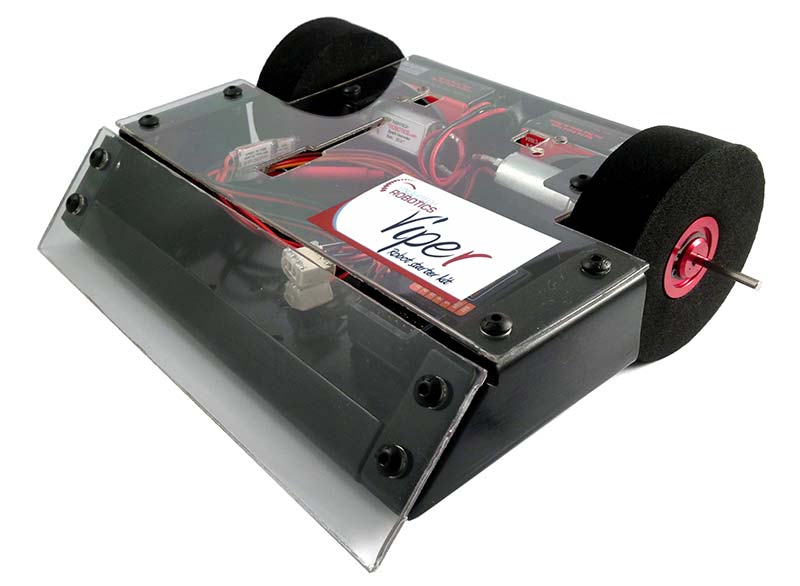 A Fingertech Viper kit. You can choose multiple attachments and weapon options, including a wedge, a flipper, a vertical spinner, or a horizontal spinner. The chassis design allows for easy modifications to continually learn on a single platform.

While you’ll be spending more to buy a kit and you won’t learn as much about robot design versus if you built your own bot, kits are a great way to get into the sport — especially if you don’t have time or tools to design and build a bot by yourself.

What You Can Learn

The lessons you learn in this sport can be immense — especially for children or students. Students looking to build up a resume with personal robotics projects can learn a lot about the design process all the way from early sketches and prototyping to design revisions if they build their own bot. If your kids are too young to compete as students by themselves, you can run as a family team.

Most robotics events aimed at kids involve stacking boxes or performing small tasks with LEGO bots, which provides a great stepping stone. However, these lack the “cool factor” of combat robots fighting to the death! This cool factor can go a long way in getting kids interested in STEM-related fields and other types of robotics in their future.

Whether you decide to build a bot as a family, with your friends, or all by yourself, you will almost certainly come across some issues while designing and constructing your bot. Thankfully, there’s a large amount of online support.

Resources such as the RioBotz “Combat Tutorial” handbook (search on the SERVO website at www.servomagazine.com for “RioBotz Tutorial”) and robotics YouTube channels such as Black Lightning Robotics, Robert Cowan, Robowars Australia, and “Alta’s Projects” are all great sources of information.

If you want to connect with thousands of other robot builders online, all you have to do is look up “combat robotics” on Facebook. There are also individual groups for whichever weight class robot you decide to run in, so make sure you search for those as well.

Finally, if you have a design question that might be a little too in-depth for Facebook, check out the “Ask Aaron” combat robotics question archive. Make certain to read the rules of the site to avoid annoying the moderators, and double-check to make sure your question hasn’t been asked before. “Ask Aaron” is one of the top-tier sources for design questions and scrolling through the answers will teach you a lot.

These resources are only a few of the support systems in the community to help you finish your first bot. Many more can be found just by searching the Internet.

What to Expect in Your Early Competitions

No matter how much research you do, as with all sports, combat robotics has a steep learning curve. The Insectweights pound-for-pound hit harder than the bots you see on TV, and as a result you should expect your robot to take serious damage. While rare, there is always a chance your robot could be completely destroyed.

However, in most cases, teams can survive with sets of spares for the drive, weapon, and main frame throughout the length of a competition. So, make sure you design your robot to be easy and quick to repair!

A few of the materials that builders use to absorb big hits include UHMW polyethylene and grade 5 titanium. Don’t use grade 2 titanium as it’s much easier to bend and is not adequate for combat robotics. 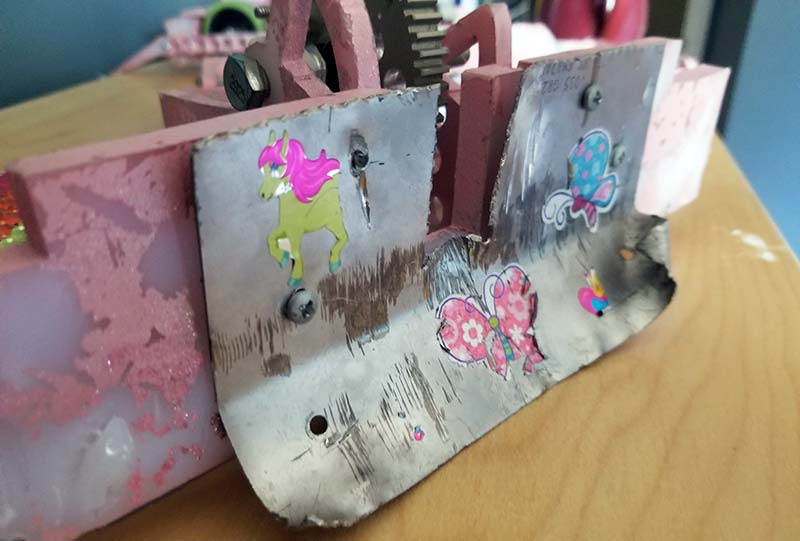 An illustration on why grade 2 titanium doesn’t work. All this damage was sustained in a finals fight. Once the lip started to bend a little bit, it just got fed into the opponent’s weapon easier and easier. The match was lost in a judge’s decision to secure 2nd place.

Watching combat robot fights online in the weight class you have chosen will help you learn a lot about how to best armor your robot against different types of weapons. Strategizing and weighing benefits and risks of design choices is a big part of the fun.

For a first-time robot, a good goal is to show up and to try to have a working robot going into each match you are in. If your robot breaks during a fight, look at it like a good thing.

Make sure to note how and why your robot broke the way it did, so you can redesign the parts that broke for next time. This design revision process is integral to every weight class.

When BattleBot’s own team, “Huge” had issues with its wheel design, the team went back to the drawing board by testing out new designs in the 3 lb weight class before finalizing the new designs and implementing them on their 250 lb robot.

Three different iterations on the same robot. Pictured is my three pound robot, “The LGBTerror.”
Each version is better than the last.

Now their bot is more indestructible than ever before!

You Can Do It!

I hope this article has helped inspire you to dip your feet into the combat robotics scene. It’s flashy, thought-provoking, and a great pastime with an amazing community of people.

To see if there are events near you, check out buildersdb.com and robotcombatevents.com. If nothing shows up close to you, ask around some of the Facebook groups as some leagues don’t always upload events to these websites.

If you would like to get in contact with me to further the conversation or to ask questions, my email is colinlesco@hotmail.com.

Good luck bot builders! I can’t wait to see you in the ring!  SV