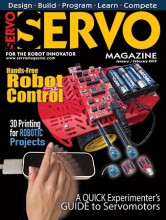 A Quick Experimenter’s Guide to Servomotors

Servomotors are indispensable in robotics.

Add a servo control trick or two to your embedded systems repertoire.

With the trend for lower 3D printer prices, it makes sense for robot hobbyists to consider ways of using 3D printing in their builds.

Then and Now
by Tom Carroll
Large Robots Over the Years
An evolution of the larger robots used in the military and in space exploration.

by Matthew Smith
in The Combat Zone

Starting simple with a first robot build for competing.


Maximizing Strength for Printing Combat Robots with a 3D Printer

bots IN BRIEF (01.2019)
Interesting TidBits From The Robot World.

Mass Customization: Why Aren’t We There Yet?
by Bryan Bergeron
Discussion of the roadblocks preventing mass customization.