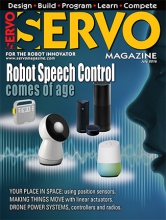 Last but not least, we’ll now build the Z carriage since the Y and X carriages are done for our CNC machine.

Understand how sensors like accelerometers and gyroscopes work when building balancing robots.

Ask Mr. Roboto
by Dennis Clark
Your Robot Problems Solved Here (07.2016)
A question on putting together an RC controlled snow blower using an Arduino, a project on robot vision using a PIXY vision system camera, and a teaser.

The Multi-Rotor Hobbyist
by John Leeman
Build Your Own Drone: Getting Started — Part 3 - Electronics and Flight Controller
We’ll add the muscles and the brains to our skeleton drone airframe, and get tantalizingly close to a test flight.


by Steve Koci
Animatronics for the Do-It-Yourselfer — The Ins and Outs of Making Things Move
Explore how linear actuators and linear servos can help you become a more successful animatronics builder.

Then and Now
by Tom Carroll
Robot Control via Speaking to the Cloud
Using the Cloud for voice control in robots.

CATAPULT: From Toys ‘R Us to Team Whyachi

Discover how CATAPULT — the largest robot in the Bone Dead Robotics fleet – went from a rehabbed toy to a full on combat Mantisweight competitor.


What I Learned at BattleBots

Explore the more fuzzy aspects of the BattleBots’ experience.


It’s All About the Benjamins Or No Bucks No Bots

The hardest part of getting into combat robots is knowing where to start. This article doesn’t go into what to buy, but more about where to spend your money.

Hardening a motor for the combat arena.