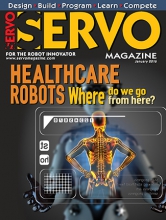 Healthcare Robots - Where do we go from here?

Animatronics for the Do-It-Yourselfer

The Growth of an Idea into Reality.

See how one scientist is helping children design and build their very own prosthetic arms out of LEGO blocks.

Building the Cruiser Robot. We’ll wrap up our series by using the knowledge we’ve gained to construct Cruiser: a rolling breadboard which can turn in place using differential steering.

Interested in using the Raspberry Pi in your robot builds? This series introduction discusses some of the kits that are currently available as a starting point.

Ask Mr. Roboto
by Dennis Clark
Your Robot Problems Solved Here (01.2016)
Is it better to have a microcontroller control the speed of your motors directly through an H-bridge or use a dedicated speed controller? Mr. Roboto is back with the answer.

Mind / Iron
by Bryan Bergeron
The Cost of Custom
One of the benefits of open source microcontrollers and other hardware is that with a modest investment in a software package such as EagleCAD, it’s a simple matter to create custom boards to fit the size and weight requirements of your robot.

Then and Now
by Tom Carroll
Healthcare Robotics
Healthcare robotics has grown tremendously in recent years, and what is of particular interest is the progress being made with robotic assistants that will allow our seniors to live independently for longer.

A rundown of all your favorite beetleweight destroyers.

Over the years, a wide range of drive system configurations have been attempted; some with a great deal more success than others.