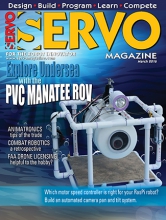 Special coverage on some of the bigger combat robot competitions.


The Power to Move

RoboClaw programmable motor controllers can give you can edge with your robotic control game.


Animatronics for the Do-It-Yourselfer — Tips of the Trade

Helpful tips of the trade for getting started in hobbyist animatronics.

Deciding which motor driver to use for a Raspberry Pi based robot platform.

Ask Mr. Roboto
by Dennis Clark
Your Robot Problems Solved Here (03.2016)
Create an LED driver circuit and a sketch that are able to interpret analog values from an ITEAD joystick shield.

Mind / Iron
by Bryan Bergeron
FAA Licensing: A Sign that Drones Have Arrived
If you’re one of the million or so recipients of a drone this past holiday season, you’ve no doubt complied with the mandatory FAA (Federal Aviation Administration) registration. (Haven’t you?)

Then and Now
by Tom Carroll
Robots — What Good are They?
Take a look at how the robot industry has changed in the past 45 to 60 years to develop truly useful robots that are good for something.

Robytes
by Jeff Eckert, Jenn Eckert
Stimulating Robot Tidbits (03.2016)
Topics covered this time include: Goblins to Gremlins UASs; robotic 3D printing on air; a robotic weed whomper; robotic garbage collectors; and a phone-robot all in one.

The Epochs of Robot Combat

For over 20 years, the spectacle of robotic combat has entertained audiences of all kinds.


RoboWars Australia:  Grinding Off the Rust

2015 was one of the best years for robot combat in Australia. RoboWars reached new people all across Australia and revitalized builders young and old.


Robot Wars Returns! — From a Decade in Storage to the Modern Arena

Can I realistically get a working robot into the studio for the first day of filming? Maybe... Let's investigate the options.


The Top Ten Reasons to Compete at RoboGames

David Calkins — the driving force behind RoboGames — gives his 10 best reasons to compete ... or at least show up for the fun!