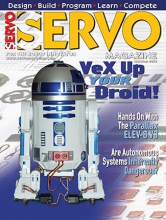 Just how safe are autonomous vehicles?

A remarkable group of teenagers from Columbus, OH — dubbed the Incredibots — have earned themselves the coveted FLL Global Innovation Award with an amazing solution for recycling Styrofoam™.

Install the Z drive assembly and reinstall the Z carriage in our CNC machine building series.

The goal of most robot hobbyists is to create a robot capable of doing something that demonstrates some degree of intelligence. Sometimes though, a robot just needs to look intelligent.


Use VEX Parts to Modify an R2D2

Take a simple replica toy of a favorite Star Wars character and make it able to move around in its familiar onscreen ways.


Getting a Handle on Automatic Doors — Part 2

The essence of machine control in robotics is motors, mechanical systems, and sensors. This mini-series on automated doors will explore the fundamentals of robotic control systems.

Learn the magic formulas for redesigning a previous animatronics display that will be sure to delight even the most discriminating of trick-or-treaters.

The Multi-Rotor Hobbyist
by John Leeman
Build Your Own Drone — Part 6: Review of Parallax’s ELEV8 v3
As an alternative to a scratch build, I’m going to assemble and fly the ELEV-8 v3 quadcopter kit from Parallax.

Twin Tweaks
by Bryce Woolley, Evan Woolley
The Robotic Chunker Redemption
Designing something for a high pressure application has a unique set of challenges.

Mind / Iron
by Bryan Bergeron
Pokémon GO — The Killer App for Augmented Reality?
The Pokémon GO mobile game may be a bright light that burns quickly, but it has brought augmented reality (AR) into the mainstream consciousness.

Then and Now
by Tom Carroll
Are Autonomous Cars and Robots Dangerous?
Due to recent in-the-news events involving autonomous cars and robots, people may be wondering how safe these technologies really are.

The Five Dimensions of Judd’s Law

Details on what it took to construct a new arena for a robot event held at ColossalCon.