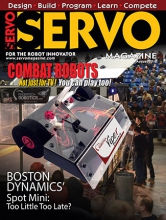 COMBAT ROBOTS - Not just for TV! You can play too!

Installing both the X and Y drive assemblies in our CNC machine building series.


Boston Dynamics’ SpotMini: A Robot Too Little, That Could Be Too Late

The SpotMini — Boston Dynamics’ newest bot for personal use — might not be enough to help the company's financial situation.

The Multi-Rotor Hobbyist
by John Leeman
Build Your Own Drone Getting Started — Part 4: Training for Flight
We're ready to train our quadcopter flight controller to the hardware and go on its maiden flight.

Then and Now
by Tom Carroll
Locating and Selecting Parts for Our Robots
It is the many parts, components, and systems under the hood (so to speak) that make any robot what it truly is.

Denise: A Quick and Easy Fairyweight

Building a 150 gram robot for competition.

by Andrew Smith
in The Combat Zone

The lifecycle of a combat robot is a never ending process of refinement and innovation.

by Charles Guan
in The Combat Zone

A critical decision in combat robot design is the choice of drivetrain in your battling bot. Here’s why to consider going brushless.

The Viper kit from FingerTech Robotics is probably the most beginner friendly way of getting into the combat robot hobby.