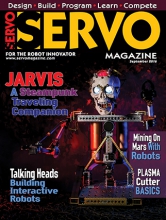 Animatronics for the Do-It-Yourselfer — Jarvis — The Steampunk Robot

My interest and fascination with the Steampunk culture has inspired me to create a new traveling companion.


Pete and Tony — The Talking Heads

Wouldn’t it be cool to have real robots that listen to and talk to us just like they do in the movies?


Getting a Handle on Automatic Doors — Part 1

The essence of machine control in robotics is motors, mechanical systems, and sensors. This mini-series on automated doors will explore the fundamentals of robotic control systems.

Teams from around the country compete for scholarships, awards, and experience dealing with mining in space.

Things you need to know if you’re looking into purchasing a plasma cutter.

The Multi-Rotor Hobbyist
by John Leeman
Build Your Own Drone — GPS Guided Flights
It’s time to take the next step on our drone building journey: GPS and telemetry.

Mind / Iron
by Bryan Bergeron
The Serious Side of Robotics
Two unrelated events that occurred this summer involving robotic/autonomous systems point out the serious side of robotics.

Then and Now
by Tom Carroll
How Capable are Robot Hands for Everyday Tasks?
Human hands are really amazing creations if you think about it, and creating robotic versions is more complicated than you might think.

Robytes
by Jeff Eckert, Jenn Eckert
Stimulating Robot Tidbits (09.2016)
Stimulating tidbits on the latest happenings in robotics for consumers, universities, professionals, and everything else in between.

Wiring Up a D2

by Mark Elam
in The Combat Zone

Learn how to wire together a D2 combat robot kit.


Memoirs of a Traveling Bothead

There’s something very special about the giant venue/large robot competitions like BattleBots™ and RoboGames.

by Henry Arid
in The Combat Zone