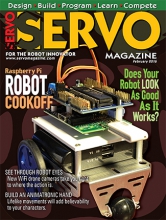 Taking a look at some popular Raspberry Pi robot chassis.

Take a look at some different camera options to stream live video from your drone or mobile robot to your smartphone on the cheap.


Let Me Give You a Hand

Just as opposable thumbs set us apart from other animals, having the fingers on the hands of your character move in a lifelike manner will set your props apart from the rest of the pack.


REVIEW:  Made on Imagination, Built on Dremel

Dremel’s first foray into 3D printers could also become a common fixture on every maker’s workbench and inside every STEM classroom.

Twin Tweaks
by Bryce Woolley, Evan Woolley
High Plains Translational Drifter
Bringing an old robot out of retirement to compete in this year‘s RoboGames can definitely melt your brain.

Then and Now
by Tom Carroll
A Robot’s Appearance
Beauty is definitely in the eye of the beholder when it comes to personal taste. However, true robot aficionados will see the inner beauty in any good robot project.

by Andrew Smith
in The Combat Zone


Higher Voltages: The iCharger 1010B+

For several years now, the voltage limit on most budget hobby RC electronics has been 6S LiPo (22.2V), and that’s been fine in combat -- certainly up to the 12 lb Hobbyweights.

The action for 2015 started with a special exhibition match between Trey Roski and Greg Munson, the founders of BattleBots.

Charles Guan — One of “The Chosen” — the happy and exalted few selected to bring a robot to the new BattleBots that was televised last year.

PicoPower
by Bryan Bergeron in Mind / Iron
If you own a smartphone or an Apple Watch, you’ve likely experienced the pain of constantly connecting your gear to a charger and configuring (i.e., crippling) your device to extend battery life.