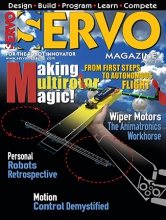 Wiper motors can provide the solution to many problems prop and/or robot builders face.

Build Your Own Remotely Operated Underwater Vehicle — Part 3: The Software and Final Observations


ESP8266 Based Robot and Robot Controller

by Craig A. Lindley

Utilizing the ESP8266 microcontroller/Wi-Fi module in robotic applications because of its capabilities and inexpensive price.

Getting the right kind of motion out of a motor can be tricky with power, engineering forces, and control all competing against your robot’s desire to go.

Decide on the power source(s) necessary for your Raspberry Pi based robot.

Next up in a series on building your own CNC machine, you’ll see how to attach the Y carriage to the frame.

The Multi-Rotor Hobbyist
by John Leeman
Build Your Own Drone: Getting Started — Part 1
A new series on getting started in the drone hobby – whether you build your own or buy one.

Then and Now
by Tom Carroll
The Popularity of Personal Robotics
What is it that makes folks love or hate robots?

Robytes
by Jeff Eckert, Jenn Eckert
Stimulating Robot Tidbits (05.2016)
Autonomous underground shipping; cargo parafoil that steers itself; being transported by a drone; a roach-inspired squashbot; and an upgrade to poll-dancing bots, Lexy and Tess.

See what all went into the design of this two-weapon 30 pounder.

Coverage of the Franklin Institute 2015 event.

Lee Reherman — better known to many as American Gladiator, ‘Hawk’ — died February 29th in California. He was 49.