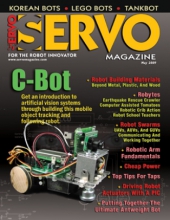 Get an introduction to artificial vision systems through building this mobile object tracking and following robot.

University of Texas UAVs, AUVs, and UGVs working in swarms

Scientists at the University of Texas, San Antonio use swarms of effective, inexpensive land, air, and sea robots that communicate with each other to complete important tasks as a group effort. Roboticists refer to these robots as Unmanned Air Vehicles (UAVs), Autonomous Underwater Vehicles (AUVs), and Unmanned Ground Vehicles (UGVs). Tasks include surveillance, search and rescue, and mine sweeping...

Programming a robotic arm is very different from programming a mobile robot. This article will examine some fundamental requirements and principles associated with this unique task. Furthermore, it will provide a 3D robot arm simulation that can be programmed just like a real world arm so that you can experiment with the concepts discussed here without the time and expense of a physical arm...

While there are certainly many products that offer kids an opportunity to learn the principles of robotics, we can all agree that LEGO deserves a crown and a medal for all its given to roboticists of all ages throughout the years. LEGO MINDSTORMS NXT is an educational kit comprised of a stable robotics platform, making it easy to prototype, build, program, and modify robots with powerful hardware tools like ultrasonic sensors, and software tools like the NXT programming environment...

Lately, making things robotic move under the control of a PIC microcontroller has been my business. As we continue the Dynamixel AX-12+ coding task we embarked upon last month, we will also explore what it takes to coax a Microchip PIC18F2620 to drive the Dynamixel RX-28 and RX-64 robot actuators, which operate on a multi-drop RS-485 link.

If you would like an introduction into the world of artificial vision systems, this is a good starting point. We will build a mobile object tracking and following robot by first constructing a very simple robot base and then using the artificial vision camera developed at Carnegie Mellon University (CMU) to be our eyes...

From the previous two articles, you learned how to output and input digital signals using National Instruments LabVIEW software and their USB-6008(9) hardware. However, the signals have only been in the TTL range of voltages (0V and +5V) and with fairly low current levels, 8.5 mA maximum per digital terminal. In the real world outside of the PC and the USB-6008(9) units, voltage and current levels are typically much higher and also include AC signals. This article will demonstrate some of ...

Robytes
by Jeff Eckert
Stimulating Robot Tidbits
If you’ve always coveted a robot’s ability to lift heavy weights and work tirelessly, Lockheed Martin ([url=http://www.lockheedmartin.com]http://www.lockheedmartin.com[/url]) has a treat for you. At the recent Association of the United States’ Army Winter Symposium, the company introduced the Human Universal Load Carrier (HULC) exoskeleton, designed to provide enhanced strength and survivability to soldiers involved in ground operations...

Robotics Resources
by Gordon McComb
Beyond Metal, Plastic, and Wood
Pick a robot — any robot — and likely it’s made of one of three materials: metal, plastic, or wood. And little wonder — these three groups of materials are used in the vast bulk of products today. From houses to cars to the chair you’re sitting in, very likely it’s made with metal, plastic, or wood, or a combination of these...

Twin Tweaks
by Bryce Woolley, Evan Woolley
Who’s Vex?
A few months ago we dismantled our beloved Vex robot, the Hungry Hungry Hippo (see the July 2005 issue for the exploits of this talented robot) to provide parts for the Surveyor Drive Base. Actually, Vex parts have made it onto a number of our robotics projects, including our ROV for the 2008 MATE Competition, our multimedia Scribbler artist, and several others. Now our once proud Vex robot has been reduced to an immobile pile of parts, and it certainly deserves better than that. ..

SERVO TankBot
by Ron Hackett
SERVO Tank Bot | May 2009
This month, I had originally planned to move on to a new TankBot project but I quickly realized that in order to do so, I would first have to dismantle our previous project because it took up virtually all the space on the TankBot’s breadboard. I couldn’t bring myself to do that. Instead, I opted to simplify the IR circuitry so that it would be smaller and therefore able to coexist on the breadboard with the next project (or two) that I have in mind...

Then and Now
by Tom Carroll
Korean Robots
Korea has ambitious plans to implement robotics in education, medicine, and in the military. Growth in robotics research and sales in Korea is predicted to increase from $1 billion (US) in 2007 to $10 billion (US) in 2010, though the international recession may cut that back a bit...

In this two part series, you will learn all the theory and practical tips you need to cut perfect threads and make stronger parts for frames, weapons, and general winningness!

Hobby Marketplace, in Bradenton, on the Gulf Coast of Florida was the venue for a small but entusiastic crowd of bot fighters.

Power packs can be expensive, but if you build your robot from cordless drills you have two battery packs complete with chargers left over. Use them to power your bot.

Due to circumstances beyond my control (plus a bit of laziness), I’ve been out of building insects for about four years.

Robots in Business School
by Bryan Bergeron in Mind / Iron
Robots have long been a staple in science and engineering curricula because they can serve as an experimental platform for technologies ranging from machine vision, programming, and wireless communications, to mechanical drive train design. Moreover, because developing robots typically involves expertise in multiple areas, they are the perfect focus for team building exercises. It might surprise you that this is especially true for non-engineering types with relatively little hands-on ...