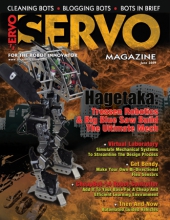 LIN is a relatively young network topology used in automobile mechatronics. See how you can apply it to your robotic needs.

Add this controller to your robot base of choice for an efficent and cheap learning enviornment.


How To Make Bi-Directional Flex Sensors

Flex sensors have a lot of applications in robotics. Here's a simple approach to making your own.

Follow the journey of designing and building your own MechWarrior inspired robot.

GeerHead
by David Geer
First Robot For Cleaning Solar Cells
When the solar energy producer cannot bring the panels to the car wash, it is time to bring the car wash to the panels!

Robotics Resources
by Gordon McComb
Blogging Your Way to Robotics Stardom
In this installment of Robotics Resources, we’ll discuss what you need to start your own robotics blog and how to keep your blog fresh and useful to anyone visiting it.

Beginner Electronics
by William Smith
Build Your Own Atom Nano Board
In this month’s article, we’ll use the Atom Nano 28-pin chip and build our own Ultimate OEM Atom Nano development board.

Thanks to Travis Schmidt, Dan Wiseman, Donald Sung, and Dennis Beck who provided information for this article.

SERVO Magazine, as a service to the building community, is summarizing the tutorial in a series of articles beginning with part of Chapter 2, “Design Fundamentals.”

My P60 gearboxes have arrived and so far, they look very promising. The overall machining quality is vastly improved when compared to the Chinese produced versions.