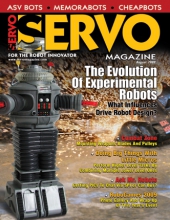 This month, we’re going to move away from the mechanics of robotic arts and focus on basic electronic principles that can be amplified to form the soul of a subservient mechatronic being.

This year, “Agus mulyana” and “Akbar Alexander” from Indonesia took the gold with a Tarantula-legged robot called “NEXT-116.”

Last time, we introduced the concept of a user friendly, self navigation system for larger vehicles such as rover platforms and boats. Now, let’s build the system! Here are the construction details for the three boards involved, plus a detailed overview of the software that makes it all tick.

In this article, we will cover the advanced Gumstix-based onboard controller, power management system, supporting telepresence electronics, and the weapons system.

I really enjoy using the CheapBot-14 robot controller that I described in my SERVO article in the June ‘09 issue. It’s a nice entry-level robot controller and I think it makes a great robotics kit (the Lawrence, KS 4H also seems to agree). However, if the CheapBot-14 is going to behave like a robot, then it needs to sense the world around it. So, this time I’ll describe some of those sensors.

Robytes
by Jeff Eckert
Robytes | August 2009
Pneumatic Robotic Hand, The Crane of the Future, Ferreting Out Contraband, and More!

Beginner Electronics
by William Smith
Programming Microcontrollers
Learning to program microcontrollers is what every electronics beginner needs to put on their to-do list. Unless you’ve been living in a cave without Internet access, you have probably heard of the BASIC Stamp 2.

Robotics Resources
by Gordon McComb
Collecting Robot Memorabilia
Robotics tends to be a consuming passion. When we’re not building them, we often watch movies about robots, or read books or collect posters, or scout for art, toys, and other artifacts.

Then and Now
by Tom Carroll
The Evolution Of Experimental Robots
What was it that actually drove the designs of early robot experimenters? Why do we build what we do? What societal influences from the movies and literature led us to certain designs?

Mr. Self Destruct is a complete overhaul of my first large combat robot: a 60 lb angled bar spinner that fought at RoboGames in 2006.

In Part 1 (SERVO May ‘09) of this guide, we examined the theory of cutting threads and the different types of taps. This month, it’s time to get practical and learn some tricks and techniques for tapping!

Alot of builders dream of creating a bot with an active weapon but are put off by the apparent complexity. How do you attach a blade to the axle?

Thirty insect weight robots clashed at the 9th House of Robotic Destruction (HORD) hosted by the Ohio Robotics Club (ORC) — a member of the Robot Fighting League (RFL) — and Cuyahoga Valley Career Center (CVCC) in Cleveland, OH in May.