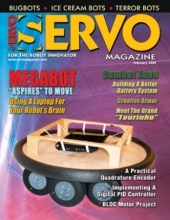 If you are building the Megabot or a similar robot, you should have the base assembled at this point. In this article, we are going to add the electronics that will make our robot move. I’ll show you the techniques I used so that you can apply them to your own design...


An Introduction to Pneumatic Sytems | Part 2

It's time to get cerebral with our BLDC motor project. However, before we transition our fingers from spinning the BLDC motor shaft to tapping out some BLDC motor code, I have a confession to make. Before I relate my experiences, though, let's have a moment of silence for the fallen Microchip TC4428 and Fairchild NDS9952A parts that are littered all over my workbench under a cloud of "magic smoke.”


Implementing a Digital PID Controller on the PenAeroBot

Our philosophy at the Control Systems Laboratory at the University of Illinois is to teach students through interacting and experimenting with their own designs. In our lab, we continuously develop experiments to implement the theoretical concepts learned in class. One of the projects we are currently developing is the Pendulum Aeronautic Robot (PenAeroBot). This system is an inverted pendulum and the idea is to control its angle of inclination, propelled by two motors...

Building projects involving electronics and robotics is much easier today than in the past because many of the commonly needed subsystems are available as ready-to-use modules (we will call them HMs [helper modules]). For example, there are HMs for controlling nearly any type of motor (DC, stepper, servo) and HMs to collect environmental data (humidity, temperature, distance to objects). You can find switching power supplies, battery chargers, Bluetooth modems, and dozens more just by looking...

Robytes
by Jeff Eckert
Stimulating Robot Tidbits
These tasty treats are big (up to seven inches [18 cm] long), fast (able to travel 1 cm/sec through wet sand), and highly desired for food (clammers are generally limited to 15 per day and must keep the first ones caught, regardless of size or condition). But as of lately, Pacific razor clams are of particular interest to Anette "Peko" Hosoi, an associate professor in the Department of Mechanical Engineering at MIT ([url=http://www.mit.edu]http://www.mit.edu[/url]), for different reasons....

GeerHead
by David Geer
Do Robots Scream for Ice Cream?
With two KUKA KR3 6 axis arms, an ice cream machine, a PLC, touch panel, toppings dispensers, and a camera and vision software, the team erected a fully robotic ice cream machine that vended scoops and toppings to about 500 customers in three days. (Now, that is how to make a popular robot!). The goal of the robotic construction was a unique demonstration of a computer vision controlled robot that constitutes a framework for developing strategies for bin-picking, which is a popular objective...

Robotics Resources
by Gordon McComb
Building A Robot? Don’t Forget LEGO!
Take the Wayback Machine to about 2001 and you'll see thousands of eBay sales, hundreds of websites, and dozens of books on LEGO robotics. While the giddy heyday of the LEGO robot has come and gone, it's still a viable — and fun! — platform for learning all about desktop automatronics. What's more, publishers keep coming out with new and improved books on the subject, and the websites devoted to robotics and LEGO continue to be an active, if not mature, community of like-minded enthusiasts...

Beginner Electronics
by William Smith
Introducing the AtomNano
Many years ago, Basic Micro, Inc. introduced the Basic Atom modules to compete with other popular modules. Basic Micro still offers the Basic Atom modules and the interpreter chips they’re based on. Now, Basic Micro is introducing the AtomNano which is similar to the PICAXE and it has many additional features. I've only seen a beta version of the chips; they are very similar to the Atom interpreter chips but at a much lower cost. Let’s take a look at the new AtomNano.

Then and Now
by Tom Carroll
Robots: From Nano to Tiny to Small
I take a lot of magazines — most to keep abreast of a broad range of technical subjects — but I rely on Forbes for business and financial articles, at least until the November 12th issue. An article in the issue, “Interview With A Cyborg” by Courtney Myers caught my eye. I had heard bits and pieces about Kevin Warwick's experimentation with cybernetics and the implantation of a 100 electrode array that he had in his arm back in 2002. (Figure 1 shows Warwick with his 'bionic' hand controlled...

My 12 pound combat robot Scurrie was designed to use two battery packs that werre physically and electrically separate from each other.

When building a combat robot, one of the first problems you encounter is how to protect it.

by Dave Wiley
in The Combat Zone

long! As soon as the doors are unlocked at 10:00 AM, the evil known as the Halloween Robot Terror and Bot Costume contest will be unleashed on the world … BWUHAHAHAH !!!!

The competition that began in Portsmouth and moved north to Nottingham finished back on the south coast in Maidstone in front of capacity audiences, with 1,200 people attending two shows.

This month, we are reviewing two cordless screwdrivers from Bosch.

Symbiotic Robots
by Bryan Bergeron in Mind / Iron
Symbiosis — an association of mutual benefit — is a popular strategy for survival in the biological world. Think humans and normal intestinal bacteria, the common behavior of smaller fisher cleaning larger fish, or even the seemingly fearless Egyptian plover bird that feeds on the leeches attached to the gums of a crocodile. Now, imagine how symbiosis could be useful in a large, 'host' robot — say a planetary rover. Wouldn't it be useful to have relatively small, internal robots that monitor..