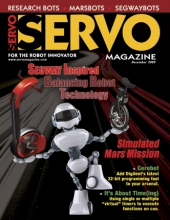 Meet Digilent's 32-bit PIC32MX-based learning tool that will serve as a controller for things like your robot's servos. Plus, there's a ton of peripheral modules for things like joysticks, LCDs, LEDs, and switches, to name a few.

GEARS "heavy-duty erector sets on steroids" made for the pefect platform as part of an Engineering Challenge Day at the STEM Innovation Center.


A Robot and Its CheapBot-08 Controller - Part 2

Now that you have the cutest small robot ever created, it's time to find out about its line follower, proximity detector, and some future designs.

GeerHead
by David Geer
Chiara - The Evolving Education-Research Robot
Chiara is a six-legged, arachnid/crab-like robot with a pincer arm that was born from the mind of Carnegie Mellon University Professor Dave Touretzky, along with PhD student Ethan Tira-Thompson and mechanical engineer/ product designer Gaku Sato.

Robotics Resources
by Gordon McComb
Looking Ahead, Looking To You
This issue marks the seven year anniversary of Robotics Resources. After some 85 installments, we’ve covered everything from yapping ‘bots to lighting up your creations with glow wire, to being the ultimate cheapskate, finding the best deals wherever they happen to be.

Beginner Electronics
by William Smith
Microcontroller Fundamentals
As this is my last column, I wanted to finish with a topic I think needs to be covered. Many of the programming books I’ve read over the years tend to skip over a major concern for the beginner, which is how a microcontroller works and how to interface other electronics to it. This final article will cover the fundamentals of working with a microcontroller. I’ll use on one of my favorites: the Atom Nano.

Then and Now
by Tom Carroll
Segway Inspires Balancing Robot Research
I normally jump right in, discussing the history and development of a particular type of robot and how that robot or the robot’s use has changed over the years. I’m going to digress away from my usual format and start with a technology and an individual who has changed robotics and the learning of robot science in a way that I personally feel no other individual has done before.

The first thing I did when building my Antweight robot Szalor, was establish a design. After I had a design, it was time

For this month’s Parts Is Parts section, we dip once again into the bottomless well that is known as the RioBotz Combot Tutorial.

The 2009 Franklin Institute Robot Conflict was held by NERC on October 4th in Philadelphia, PA. This was the third annual competition at the institute, with numerous robots competing in the one, three, 12, 30 lb, and Sportsman classes.