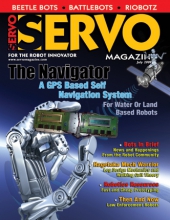 The Navigator: A GPS Based Self Navigation System For Water Or Land Based Robots

Our goal this month is to assemble a set of software routines to take advantage of the LIN protocol we learned last time.

If you've ever wanted to send your rover or R/C boat out to complete a mission all on its own, check out this GPS based navigation system.

This installment covers the build itself, the mechanics behind the leg design, and the theory behind the walking gait.

Twin Tweaks
by Bryce Woolley, Evan Woolley
Universal Serial Bust
Just about every robotics kit that we’ve reviewed for SERVO uses a serial connection for programming, so we’ve been forced to invest in a serial-to-USB adapter.

SERVO TankBot
by Ron Hackett
Adding Sonar Capabilities to Your TankBot
In the previous TankBot column, we simplified our IR obstacle detection system to make it smaller so that the IR circuitry could coexist on the breadboard with the next project (or two) that we would construct. This month, we’re going to make good use of the extra space we created.

Robotics Resources
by Gordon McComb
Fast and Cheap Prototyping
In this month’s column, we’ll concentrate on just mechanical hardware prototyping, as this tends to be an expensive and time-consuming task for many custom projects.

Then and Now
by Tom Carroll
Law Enforcement Robots
The two companies discussed here and their line of remotely controlled robots represent just a handful of the many companies producing state-of-the-art ‘assistants’ to serve law enforcement agencies and the military.

Choosing the “value” options lowers the cost quite a bit, with the Value Beetle costing about half the Ultimate.


A Color To Dye For

UHMW (Ultra High Molecular Weight) polyethylene is an increasingly popular plastic for use in robotics in general, and combat robotics in particular.

The iNDi 16x4 Pro Charge has both 110V AC and 12V DC inlets so that you can use it both indoors with the lincord provided or outdoors with the separate 12V leads.

During April 21-26, about 64 bots brought their owners to Vellejo, CA for the much anticipated return of BattleBots to the public stage.