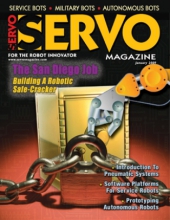 Moving On With Your Robot

So, you’ve got yourself some battery powered drills and have started to convert them into gearmotors to drive a robot.

Building an autonomous robot is a goal of many robot enthusiasts. If you look up autonomous in the dictionary, you will see terms like “self directed” and “self sufficient.” If you apply the first term to a robot, it simply means that the robot is capable of accomplishing a task without human intervention. The second term suggests a deeper commitment. A self sufficient robot might be one that is capable of repairing itself, or at the very least, capable of recharging its own battery so that...

What is special about service robotics as compared to industrial robotics? Imagine it gets dark in the living room and you turn on the light. For most industrial robots, such a change in the illumination pattern would be a catastrophic event. Those robots are designed to work in closely controlled industrial settings. Their computer vision systems are not able to cope with such changes in the illumination without reconfiguration or reprogramming. On the other hand, interacting with the...


An Introduction to Pneumatic Sytems | Part 1

If you’re looking for a way to add muscle to your robots, then as Bob Dylan would say, the answer may be may be blowin' in the wind in the form of compressed air and pneumatic controls. I have wanted to incorporate pneumatics into some of my personal projects and (as an instructor) into my industrial control systems course for some time now, but wasn't sure where to begin. Pneumatic trainers are available for classroom instruction, but the ones I have checked into cost anywhere from $3,500 ...

In this article, we are going to finish up the Firebot shown in Figure 1. Before I get into some of the construction techniques, I want to go over some of the components we will be using in this portion of the project.

Manually rotating the shaft of my Anaheim Automation BLY171S-24V-4000 BLDC motor with my fingers isn't making it. So, I've scrounged up and assembled some electronic components that I intend to use to force the BLDC motor shaft to rotate in lieu of my motor-shaft-driving fingers. If you take a look at the specifications for the BLY17 series of brushless DC motors, you'll see that every motor in the family has differing characteristics. With that, it will be useless for me to whip up a ...

Robytes
by Jeff Eckert
Heavy-Duty Hauler
In many nooks and crannies of the bot industry, miniaturization is the name of the game. Not so at Caterpillar, Inc. ([url=http://www.cat.com]http://www.cat.com[/url]), which is working with Carnegie Mellon’s Robotics Institute ([url=http://www.ri.cmu.edu]http://www.ri.cmu.edu[/url]) to develop autonomous versions of haul trucks used in mining operations. Among them is the 793D haul truck, which can handle payloads of 240+ tons. Aimed at increased productivity and zero-injury safety levels, the behemoths will be fitted with an array of gadgets to keep...

GeerHead
by David Geer
Open Robot Platform is Student’s Delight!
Open Robot is, not surprisingly, completely open source. Teachers and students may modify and distribute all the robot’s documentation, software, printed circuit board designs, and mechanical design files as long as credit to the inventor is maintained. Howell is eager to see an open source community grow up around the Open Robot, adding hardware, software, sensors, and “mechanical end-effectors" ...

Twin Tweaks
by Bryce Woolley, Evan Woolley
The San Diego Job
We’ve all been there — you’ve outsmarted the alarm system, outmaneuvered the guards, and outmatched the inevitable laser security devices to finally arrive at the safe. You’ve smartly brought a robot along to do your dirty work, and just as your mechanical minion is twisting in the combination the police arrive because your robot was too slow! We’re talking about optimization, of course. You have an initial design, but things can always be improved through analysis and iteration...

Robotics Resources
by Gordon McComb
Kits for Learning About Electronics
In this month's column, we'll discuss learning more about the electronics side of things. To keep things as basic as possible this time around, we'll concentrate on using "learning lab" kits and the tutorials that come with them to learn more about electronics. These kits come with all the parts you need to follow the step-by-step guide that’s included with the product. These learning labs are a great way to begin your electronics education...

Then and Now
by Tom Carroll
Government and Military Robots
I have long been interested in military weapons. The meanest, sneakiest, most powerful, and most complex weapons seemed to always attract my attention. Adding robotics to these types of weapon systems makes it just that much more appealing to me. Military robots — ground, sea, and air versions — have made the conflicts in Iraq and Afghanistan safer and more efficient for our troops. The Military Channel and History Channel’s Future Weapons make it clear that new military technology...

by Donald Sung
in The Combat Zone

Batteries are one of — if not the most — important parts of a combat robot. They are what run the robots and bring them to life.


Moving On With Your Robot

So, you’ve got yourself some battery powered drills and have started to convert them into gearmotors to drive a robot.

The Roaming Robots winter tour made a late but exuberant start in Portsmouth. As usual, there were three weekend events over October and November, and three cities with each well advertised event attracting a paying crowd for two or three shows.

by Wendy Maxham
in The Combat Zone

Saturday October 18, 2008, 10:30 am and a 10 year old boy leans over the railing near the pits. “When does the fighting start?” he yells down to me. “Noon,” I shout back, “but you’ll probably want to get here a little earlier because the good seats should go fast.”