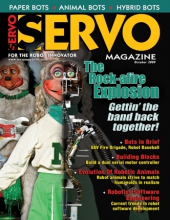 Current trends in software development for robots are discussed.

This time, we'll program the microcontroller and the servo controller board to complete this unique platform.

A serial interface will be used to facilitate commincation between the master and the motor controller, making this a great building block for a variety of applications.

GeerHead
by David Geer
Adept Quattro Handles Solar Cells With Care
The Adept Quattro s650H is an industrial robot with four parallel arms mounted on a rotational body. The arms are extensions of four motors, one motor per appendage. These arms are a good fit for processing crystalline silicon wafers for solar cells as they produce more solar cells per hour than human employees do.

Beginner Electronics
by William Smith
PICkit 1 Programmer
The PICkit 1 is a leaded design so you can see all the components that make up the programmer, so things can easily be fixed if something fails on the board.

Robotics Resources
by Gordon McComb
Here Come the (Paper?) Robots!
At least once a month, I get email from a mom or grandparent asking for my advice about the best robot kit for their seven year old. Oh, and they don’t have much money to spend, so can the kit be under $20, and preferably under $10?

Then and Now
by Tom Carroll
Robot Animal Strive to Match Humanoids in Realism
It didn’t take inventive designers and experimenters long to determine that creating realistic robot human beings was close to impossible.

In late 2007, I began the design and construction of my first combat robot over three pounds: a 30 pound featherweight.

A curiosity about titanium is that its surface can be colored without paints or pigments; just using Coke (or Pepsi) in a technique called electrolysis or anodizing.

by Seth Carr
in SERVO TankBot

July 11th was the second Gulf Coast Robot Sports event at the Robot MarketPlace in Bradenton, FL. Fifteen robots showed up for a chance at one of the prizes, totaling over $150.


Thoughts of a New EO

by Seth Carr
in The Combat Zone

So, you’ve been building robots for a while and now you want to put on an event. Sounds easy enough, in theory.

Bots In Brief | October 2009
A Battery Of Balance, EyeBot Can See Y ou, 'Plane' And Simple UAV, Give Us A Hand, And More.