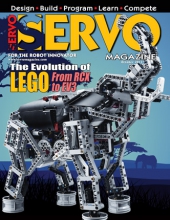 The Evolution of LEGO From RCX to EV3

RoboGames — From an International Perspective

Robotics truly has worldwide appeal, and that was very apparent with over 17 entrants from international countries competing at this year’s event.


Team Kiss My Snake Tears It Up With a Barbie Jeep

When combat roboticists are in the off-season, they take some of that technology and build race cars. Find out what happened when Team KISS Robotics and Team Plumb Crazy joined forces at a recent event.

Explore some unconventional ways of creating robots that can learn to solve problems on their own.

Experiences with each type of printer are summarized, and a list of 13 tips to keep in mind when buying a 3D printer are given to wrap up this series.


The Road to the DARPA Robotics Challenge

In this second installment, Team Walk Like a Man describes the mechanical design of their Track D entry hopeful, Watson.

Learn about interfacing switches to the ArdBot II, along with how to use the info these sensors provide to interactively command the robot’s motors.

Twin Tweaks
by Bryce Woolley, Evan Woolley
Material Bot
You can build a robot out of pretty much anything, but if you find yourself debating between general categories like wood or plastic or metal, this is the article for you.

Then and Now
by Tom Carroll
The LEGO MINDSTORMS Evolution — RCX to EV3
Take a historical look at how LEGO got started and where they are today.

BUILD REPORT: The Quest for a Dif ferent Kind of Flipper: Building the Beast

In a recent issue of SERVO, I wrote about scaling up my successful six pound Mantisweight class flipper Threecoil into a 30 pound Sportsman class robot.

The National Robotics League (NRL) 2013 Championships held in Indianapolis this last May, featured 48 robots built by nearly 200 students from 25 schools across the US.


Robot Combat Gets Savage at HORD 2013

by Tiffany E. Clegg
in The Combat Zone