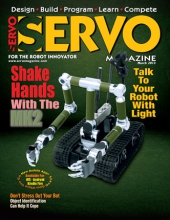 Shake Hands With The MK2

Simple techniques to communicate using light with your Arduino-based robot.

By giving your robot just a rudimentary ability to identify objects, you can increase its ability to cope with more complex situations.

Read about some add-on items that hopefully will inspire your imagination.


The Neato Robot and ROS

This eighth grader shows us how to hack a vacuum bot to turn it into a TABLEBot for competition.

GeerHead
by David Geer
HDT Global’s Adroit MK2 Robot Arms
They may not be able to transform into cars, trucks, or aircraft, but there is a lot of stuff these manipulators can do.

Ask Mr. Roboto
by Dennis Clark
Your Problems Solved Here
The saga on getting control over your FrankenRoomba continues ...

Twin Tweaks
by Bryce Woolley, Evan Woolley
Robots in 4D
4D Systems is offering some new smart OLED and LCD display modules that will play well with your robots.

Then and Now
by Tom Carroll
Controlling Robots in the Air and on the Ground
Multi-rotor flyers are proving to be the next level of robotics.