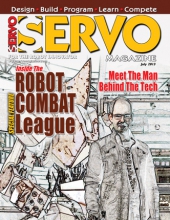 The Brain Behind Robot Combat League

Get some unique insight into the original series from Syfy from the man who created all the fighting robots.


Mead Gets the AXE

Ross Mead from Team AXE gives his perspective on the groundbreaking competition/TV series that aired recently.


Robot Combat League as Seen Through the Eyes of a Contestant

As a member of the winning Team Crash, Dave weaves a wonderful tale of his and his daughter, Amber’s life-changing experience on the show.

BarBot 2013 Serves Up Some Intoxicating Entries

Building a beverage-serving bot takes a fair amount of time and money. Learn how some of the entries came up with their creations for this popular annual event.

See what it took to get from a ready-for-action printer to a first print.

GeerHead
by David Geer
Giant Robot Jellyfish
“Cyro” mimicks its real life counterpart’s ocomotive capabilities to make it useful in both research of thesea itself and ocean-based surveillance.

Ask Mr. Roboto
by Dennis Clark
Your Problems Solved Here
Working out interfacing issues with servos other than the Robotis Dynamixel AX12s.

Then and Now
by Tom Carroll
Robots to Serve Man
Robots can serve humankind in many positive ways.

BUILD REPORT: The Quest for a Dif ferent Kind of Flipper: Making the Machine

This month, I will discuss the fabrication of some of the parts that made up the flipper assembly in Threecoil.


Then and Now: A Decade Later With Jim Smentowski

Jim Smentowski is the builder of one of the legendary bots in our sport: Nightmare.

RoboGames — the largest robotic event in the world (according to Guinness World Records!) — returned to the San Mateo, CA Exposition Center April 19th through 21st.

It is convenient to have all four batteries on one charger, and it takes up less space in the pits. It’s also a little cheaper than having four separate chargers, but it could also mean that if it fails you may lose all four at once.

What MFG.com does is provide a location for users to post quote requests for custom fabrication. Once you've posted a quote request, shops from your specified search region (US, North America, Global, or specific national and international locations) will then be able to see your quote request and bid on it.