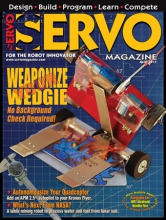 Although RASSOR is far from being space-ready, this autonomous machine will ultimately play a key role in being able to process water and fuel from lunar soil.

Part 6: APM 2.5 Per reader requests, this final installment of our quadcopter build will discuss the APM 2.5 controller in detail.

Part 2: Their Use with Robotic Arms.


Give Yourself a Weapon!

As a follow-up to the hugely popular Give Yourself a Wedgie project that appeared in the October 2012 issue, this article will show you how to add either a clamp or lifter weapon to your robot.

Robytes
by Jeff Eckert
Stimulating Robot Tidbits
• Diggin’ It at NASA • Literally for the Birds • A UAV to Track Taliban • And a UAV to Track You • Creepy Times Two.

Then and Now
by Tom Carroll
Get That Robot Built the Easy Way
Parts to build great robots are all around us. Just use your imagination the next time you’re shopping at the local hobby, hardware, marine, RV, or toy store.

In Part 2 of this series, I discussed how I made the chassis and drive train. In this part, I will show you how I wired the bots and set up the transmitter and receiver.


Is This the Future of Combat Robotics?

There have been whisperings and rumors of a revolutionary new drive system for over a year now, but details have been hard to come by until our photographer got a picture at a recent late night test session in a barn in rural Pennsylvania. Our contact (who wished to remain anonymous) could give us only a few details of what she called “hoverbots.”

For as long as I can remember, there hasn’t been a power switch designed for the 150 g to 3 lb combat robot classes that is readily available.

GCRS 11 continues its series of events hosted by Jim Smentowski, owner of The Robot Marketplace. The events give Florida Insectweight robot builders a chance to get together for a day of robot battles with some new competitors, as well as to continue some long-fought rivalries!