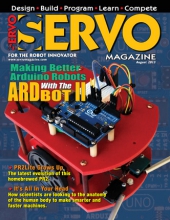 The announcement that RoboGames was not being continued by Dave Calkins and Simone Davalos started a FaceBook conversation with over 1,000 comments. A spinoff post worthy of recording as part of our “History of Robot Combat” series also ensued.


PR2Lite Grows Up — and So Do Its Makers

Find out the latest evolution in this home brewed version of Willow Garage’s PR2.


It’s All in Your Head

More and more, scientists are looking to the anatomy of the human body to maker smarter and faster machines.

With Tibbo, you can write a few lines of Basic code and exchange data with peers and hosts via the Internet. The Tibbo EM500 is perfect for retrofitting devices with serial ports for use on the Internet. How can you implement it in your next bot build?

Originally debuted in 2010, ArdBot is back with a more slim line design, plus lots of added Arduinos for all kinds of new features and capabilities.

This time, slicer software that is used to convert 3D models to instructions a printer can actually understand will be covered, plus the MakerGear M2 arrived!

Twin Tweaks
by Bryce Woolley, Evan Woolley
Tinker, Printer, Solder, Die
These “printer wars” show how even newbies can get started into the fascinating and terrifying world of robotics with junk.

Then and Now
by Tom Carroll
ServoCity
There once was a time when robot builders had only a few sources for project parts. That is no longer the case.

TIPS FROM THE PITS: Getting Connected

The “magic smoke” from burned out motors and electronic speed controllers (ESCs) is inevitable in combat robotics, and getting those parts replaced quickly can make the difference between working your way through the brackets to the finals and an ignominious forfeit and early exit.


BUILDER’S TIPS: You Can’t Take It With You: What Tools To Bring

I won't be talking about tools that are particularly specialized. If your machine needs any specific equipment for basic maintenance and repairs, those take priority. The following sections will cover tools that are almost universally useful in the pits during an event.

The announcement that RoboGames was not being continued by Dave Calkins and Simone Davalos started a FaceBook conversation with over 1,000 comments. A spinoff post worthy of recording as part of our “History of Robot Combat” series also ensued.

Kitbots and FingerTech Robotics have joined forces to develop a new range of hubs for smaller bots.