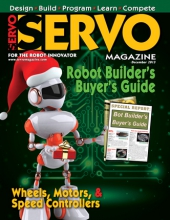 Get Your Robotics On!

One of the goals of the Boise Robotics Group (The BoRG) is to teach folks how to make robots. See what they did and some of the lessons they learned themselves.


Disability in the Modern Age: How Rehabilitation Robotics is Changing Lives Across the World

After being in a severe accident, implementing robotics into the recovery process took on a whole new meaning.


The Road to the DARPA Robotics Challenge — Part 4

Dealing with the DRC qualifications, having to rebuild yet again, and taking those first steps.

Turning Your Robot Off Via Software

This time, we’ll go over the wheels, gears, and chassis parts for our PBOD.

Most hobby robots are powered by small microcontrollers with limited capabilities. Could using a tablet instead with all its available features be the best way to rock your robot’s world?

Twin Tweaks
by Bryce Woolley, Evan Woolley
To Infinity and Beyond
Few things capture the imagination like robotics ... except maybe space elevators.

Then and Now
by Tom Carroll
Bases and Structure for Mobile Robots
Tips, techniques, and types to consider when selecting the foundation for your bot.

This article is a mini build report from my perspective of getting the bots and boys ready for their first event with their own "real" combots at Battle at Maker Faire, which took place on October 5th at the Orlando Mini Maker Faire.