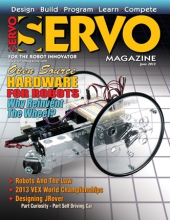 Open Source Hardware For Robots. Why Reinvent The Wheel?

Did you know that there are community-developed hardware robot designs that are freely licensed and downloadable? If not, you need to check out this overview of different platforms that have been developed over the last two decades.


Interface and Communication Techniques to Control the World (or, at least H-bridges)

In the mechatronic world, it’s all about control. See how to gain worldwide dominance using some simple CCS C code, a Wi-Fi module, and a handful of Microchip silicon.


Curiosity and the Self-Driving Car

Preparing for the 2012 Roborama contest course inspired a melding of Mars rovers, self-driving cars, and lane-following technology that gave rise to JRover.

Follow the assembly process on four different 3D printers, so that next time we’ll be ready to actually print a simple object.

Then and Now
by Tom Carroll
Robots and the Law
What will the legal implications be if robots violate human rights?

BUILD REPORT: The Quest for a Different Kind of Flipper

by Collin Berry
in The Combat Zone

A New Set of Heroes Emerges


TIPS FROM THE PITS: Speeding Up a Motor Change

Half the battle in combat robotics is having your bot repaired completely in time for the next fight. This is the first of a series of short articles detailing some ways to make that just a little bit easier.