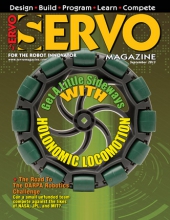 Get A Little Sideways With Holonomic Locomotion

The Road to the DARPA Robotics Challenge

Read one team’s chronicle of what it will take to compete in track D of this monumental event.

As part of NASA’s annual event, special workshops were held for school-aged children — all the way down to preschool — to help foster a love for STEM education by learning to use LEGOs to build bots.

Filament is the life blood of a 3D printer. This month, various types of filament are discussed and how to calibrate the printer for a specific kind.


A Look at Holonomic Locomotion

Holonomic robots are omnidirectional and incredibly mobile. Here is a look at these types of robots constructed with two different styles of wheels.

We’ll move forward with completing the ArdBot II’s electrical subsystems, and give our robot its first taste of adventure with a simple servo test routine.

GeerHead
by David Geer
Modular Cooperating Robot Components
Hip, new robots from Barobo, Inc., build on themselves to form educational and prototyping platforms, as well as enable new hacks for the creative roboticist.

Then and Now
by Tom Carroll
Parallax, Inc.
Learn about the beginnings of this ground-breaking company and some of the products they’re famous for.

by Craig Danby
in The Combat Zone

For the last 16 years, I have been building and competing in robot combat. You name it, I’ve probably built it — from walkers to brick bots to full power flippers to hydraulic crushers in almost all weight divisions.


THEN and NOW: A Decade Later With Richard Stuplich

Richard Stuplich first came to the public’s attention in the final two seasons of BattleBots. His super heavyweight, New Cruelty, was eight wheels and 220 pounds of rock solid battering ram.

by Zachary Witeof
in The Combat Zone

One of the challenges when designing a Fleaweight (150 g) robot is finding lightweight components that allow you to squeeze the most out of the limited weight allowance.

by Zachary Witeof
in The Combat Zone

The Banebots BB-12-45 was for many years the most commonly used speed controller in the 12 lb Hobbyweight class of combat robot.