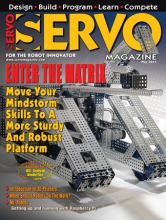 Enter the MATRIX: A Robust New Build System for FTC and Beyond

MATRIX Robotics enters the “kit” competition with a brand new 3D metal construction system that is perfect for use in events like the FIRST Tech Challenge, as well as for hobbyists and educators.

There has been a great deal of hype around 3D printers lately. If you are planning on purchasing one, be sure you read this article series first. What you find out may surprise you.

Building robots with a great finished look doesn’t have to be difficult or expensive. This article will show you how to construct a personable, cost-effective robot out of a trash can.

Robytes
by Jeff Eckert
Stimulating Robot Tidbits
• Cold Sub, to Go • Bots Built for Showbiz • One for Your Cat

GeerHead
by David Geer
Hydroid Deep Sea Marine-Exploring REMUS AUVs
A Q&A with the makers of these cylindrical swimming automatons.

BUILD REPORT: The Quest for a Different Kind of Flipper: Inspiration and Early Attempts

I have been building fighting robots for several years, and starting in 2009 I managed to build a 12 pound robot named Scurrie that won several competitions in a row. After some time, I was also successful with a 30 pound shell spinner named Tetanus.


Then and Now — A Decade Later With Christian Carlberg

Last year, the Combat Zone published a series of articles covering the history of the sport by recovering the undocumented, nearly lost information about each of our sport’s major events — past and present. Now, 10 years after the demise of major television coverage, we tracked down some of the most famous names from that era to gain their perspective on what some see as “the glory days” of the sport. Our first victim is competitor and host of “The Builder’s Corner” from the BattleBots™ series.