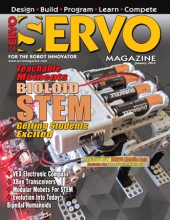 Go Mod With Your Mobile

What do you get when you give your robot a GPS module, a microSD card, and a temperature probe? A robot who knows where it's going and can tell you where it's been. Depending on where your robot is or is going, it may be wrapped up in an overcoat or sporting a Hawaiian shirt.


Get the Most From XBee Transceivers

by Jonathan A. Titus

Small, ready-to-use wireless modules let you control things like your robot’s motor speed and actuators. New bot builders can follow the examples given here to get off to a good start using XBee modules.

See how to navigate your robot’s way around by implementing an electronic compass.

Part 3: Assembly! This time we put our quadcopter together, with plenty of tips and techniques given along the way.

GeerHead
by David Geer
Modular Mobots Make STEM Education Fun
UC Davis — a 100+ year old institution of higher education — is encouraging STEM (Science, Technology, Engineering and Math) educational enhancements through the use of Mobots: a robot module platform created by Engineering Professor Harry H. Cheng and his master's student Graham Ryland. The plastic Mobots with their user-friendly programming and software are already in use in many area schools.

Twin Tweaks
by Bryce Woolley, Evan Woolley
Nice STEMs!
One of the things we love about robots is that they are such perfect teaching tools.

Then and Now
by Tom Carroll
Robots Evolve into Today’s Bipedal Humanoids
Just as man's ancestors began to walk on two legs, robot experimenters decided over a decade ago that a bipedal humanoid robot was the holy grail of robotics. Science fiction movies always showed robots as two-legged walking creations.

by Doug Brown
in The Combat Zone

October in Seattle brought cool temperatures, wind, and rain outside. However, inside the Seattle Center Armory, the competition was heating up at the 2012 Seattle Bot Brawl.

by Dave Graham
in The Combat Zone

The fall of 2012 posed a challenge for the members and supporters of the Chicago Robotic Combat Association (CRCA).