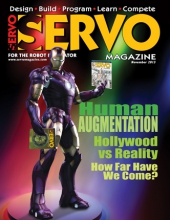 The Road to the DARPA Robotics Challenge — Part 3

This time, the team discusses mechanical changes, the biped systems, and using the Gazebo simulator as they continue work on Watson.


Get Your Motors Runnin’

Spinning a couple of motor shafts and positioning a hobby servo has never been easier. The combination of the Digilent motor shield, 32-bit Uno32, and ready-to-roll MPIDE motor shield library takes all of the pain out of robotic motor control.

Sometimes it’s important to build a robot just for fun and entertainment for both ourselves and others.

Now that we’ve wrapped up our series on 3D printers, we’re going to build a fighting robot with them.

In this final installment, we’ll take a $2 TV remote and command the ArdBot to do our bidding from a distance.

GeerHead
by David Geer
The Famous Robots of Derek Scherer
This is why robotics is so cool ... you can go from working on top secret Army bots to making animatronics for blockbuster movies.

Then and Now
by Tom Carroll
Human Augmentation
The concept of exoskeletons is not new. Read about where we’ve been and where we’re going with devices that enhance human performance.

by David Calkins
in The Combat Zone

These words of wisdom are direct from robot master Dave Calkins. Ignore them at your peril.

Here’s how the smaller bots fared at Robot Battles this year. Thirteen Antweights and 15 Beetleweights competed in the Micro Battles event. Both classes had a diverse selection of machines competing for the win.


THEN AND NOW: Carlo Bertocchini

When it comes to the glory days of televised robot combat, few competitors can beat Carlo Bertocchini's record.