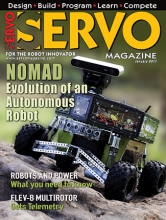 We’re getting closer to a finished CNC machine! This time, we are going to install the clamp table.


Animatronics for the Do-It-Yourselfer — Power to the Robots

Although getting power to your props is not one of the most exciting parts of the building process, it is one of the more crucial aspects.

Here’s an easy way to add sensors to your robot with no battery, no wires, and no switches, plus you get Bluetooth.


NOMAD: The Evolution of an Autonomous Robot

Here's the next update on the ongoing Nomad Autonomous Robot project. I've learned a lot along the way, and as usual, got myself in way over my head.


Roll Your Own Turtlebot

It's easy to build the equivalent of a Turtlebot with a Neato!

Then and Now
by Tom Carroll
The People Behind the Evolution of Robotics
A discussion on why the evolution of robotics occurred the way it did, and who drove the latest growth activity in robotics with newly-formed companies.

The Multi-Rotor Hobbyist
by John Leeman
The Multi-Rotor Hobbyist — Adding Telemetry to the ELEV-8
As multi-rotor pilots, we often have to operate by look and feel. So how about adding a telemetry kit to get real time aircraft data such as the altitude, air speed, and attitude sent back to our tablet in the field.

The Art of the Bot

To robot fans and builders who still have some shred of non-metallic awareness, there is another form of art in our sport.

Avoid showing up to your next competition with a handful of items you didn’t bring.


NERC’s Battle on the Parkway: 10 Years of Fighting in Philly

Find out the winners and losers at this 10th anniversary NERC competition.

The Robotics Cottage Industry is Alive and Well
by Bryan Bergeron
I love visiting the Kickstarter site for inspiration and a glimpse of the worldwide robotics cottage industry. At last count, there were over 1,400 Kickstarter robotics projects listed — mainly from the US, EU, Australia, and Canada.