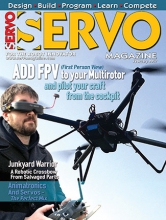 Animatronics for the Do-It-Yourselfer — Servos: The Basics and Beyond

Becoming comfortable using servos and taking advantage of all the added features available will expand your capabilities as a builder.

Berry's head keeps falling off. Time for a better mount!

It’s been a while since we started this CNC machine build project, so let’s go over spindle hookup and get ready to make something.

If you weren’t lucky enough to score one of SparkFun Electronics’ limited edition Cyber Monday Redbox Robots, then you’re in luck! We’ve come up with our own version that is a tracking, flashing, and speaking robot.

Ask Mr. Roboto
by Eric Ostendorff
Your Robot Problems Solved Here (02.2017)
Topics discussed this time include servo options, dealing with a sonar range finder’s erratic responses, an explanation for jittery servos, and to LEGO or not to LEGO.

Twin Tweaks
by Bryce Woolley, Evan Woolley
Junkyard Warrior
Building cool stuff out of junk you have laying around has a proud and colorful history.

Then and Now
by Tom Carroll
Building a Robot? Just Go for It!
Don’t overthink things so much when building your first robot. Keep it simple and fun, and just do it!

Robytes
by Jeff Eckert, Jenn Eckert
Stimulating Robot Tidbits (02.2017)
Stimulating tidbits on the latest happenings in robotics for consumers, universities, professionals, and everything else in between.

My First Antweight — A Dark and Dirty Disco

by Ricky Matsko
in The Combat Zone

Follow the build of the Antweight bot, A Dark and Dirty Disco that started just one month before it was supposed to compete.


An Interview with Ed McCarron

Get to know Ed McCarron from the NERC a little bit better.

The Pennsylvania College of Technology hosts its first ever SWORD event.

Last year’s event marked the fifth official Robot Battles event held in Music City, featuring the return of Kelly Lockhart as MC, and a much larger arena than in previous years.

Underwater Remote Operated Vehicles: The Next Big Thing in Robotics?
by Bryan Bergeron
UROVs — the little brothers to the massive commercial underwater vehicles used to inspect hulls, ship wrecks, and pipe lines — are where quadcopters were five years ago.