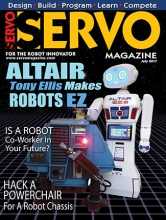 After completing an online course on robotics, I decided to create a robot arm that I could use as a platform to test all the theory that had been covered and experiment with new ideas.

What good is a fabulous prop if you can’t see it? Serious attention should be devoted to properly lighting your displays.

On the surface, using a power wheelchair as a robotic base seems like a no-brainer. Unfortunately, it is not, so here’s what I did.

RoboGames (the Olympics for robots) is the biggest “open” robot event in the world.

Then and Now
by Tom Carroll
What is the Future of Humans Working Among Robots?
What is the future role of robotics? Will robots displace all human workers?

Ask Mr. Roboto
by Eric Ostendorff
Your Robot Problems Solved Here (07.2017)
Tap into the sum of all human knowledge and get your questions answered here! From software algorithms to material selection, Mr. Roboto strives to meet you where you are — and what more would you expect from a complex service droid?

by Ian McMahon
in The Combat Zone

See how to determine the correct charger for your particular size/type of battery.


RoboGames 2017: The Rise of Whiplash

by Matthew Vasquez
in The Combat Zone

With the level of competition in the heavyweight combat class getting tougher, it was time to think outside the box on robot design.


The Conversion of a Robot Skeptic: My First RoboGames

by Anne Lillie
in The Combat Zone

There’s a lot more to the hobby of building and fighting combat robots than you might realize.

A Matter of Trust
by Bryan Bergeron
Would you trust a robotic surgeon to operate on you or a loved one? Or, an autonomous driverless car? Would you trust a domestic robot around your newborn or your grandparents?