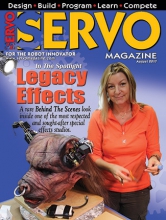 Interfacing an FPGA PMOD Sensor with the Digilent Arty™ Board


Animatronics for the Do-It-Yourselfer — Legacy Effects

Then and Now
by Tom Carroll
So, You Want to Design a Marketable Robot
Bringing a robot design to market can be a tedious process if you don’t have a good strategy from the start.

Taking on a challenge presented by Kyle Singer to build a 12 lb Hobbyweight robot.

by Ricky Matsko
in The Combat Zone

I knew with the lack of events in the Midwest, someday I would have to travel for a robotics tournament.

by Dylan McCarthy
in The Combat Zone

After looking at several designs and weapons, I chose to design a full-body “shell” spinner.

Extending Your Life as an Embedded Intelligence
by Bryan Bergeron
Is living forever really an option?