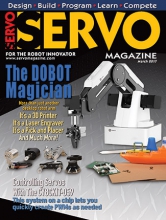 Animatronics for the Do-It-Yourselfer — The Animatronic Body, Inside and Out

The process of building an animatronic character starts and ends with a strong body.

If you've ever wanted a quality robot arm or a 3D printer, you should really consider the Dobot Magician. Its accuracy and easy-to-change end effectors give it multiple personalities that can easily satisfy a variety of needs.

by Jonathan A. Titus

A programmable system on a chip (SoC) lets you quickly create pulse-width modulator (PWM) circuits as needed, and control them with only a few commands.

In this final installment, we will finish the KReduCNC build by going through its operation and creating a part. First off, there are some upgrades to go over.

Then and Now
by Tom Carroll
How do You Define a Robot?
Robots today take on so many different forms. It is even harder to determine just what is a robot and what is not.

Ask Mr. Roboto
by Eric Ostendorff
Your Robot Problems Solved Here (03.2017)
Using a BASIC Stamp 2 in omni-wheeled robots, building a robot arm to move chess pieces, and ideas for keeping yourself entertained on long flights are all discussed this month.

C. B. Radio: Garage Door Parts in a Garage Bot


From Nothing to Robot in Two and a Half Weeks

by Alex Horne
in The Combat Zone

Putting my 12 lb (Hobbyweight) combat bot, Isotelus Rex on a weight loss program to get better results at competitions.

What’s Your Robot Type?
by Bryan Bergeron
Just like with selecting your preferred dog breed, we each have our own robot preferences.