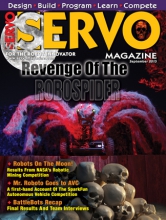 Ready to try a different microcontroller in your robot builds? Well, this new series will show you how to work with a PICAXE 08M2+.

Teams from all over the country meet up again to compete in another out-of-this-world mining matchup.

Take a closer look at some of the details of how this classic event was run and who ultimately took home the Giant Nut.

Team Wrecks and Team Witch Doctor and Shaman open up about their experiences with the recently televised BattleBots competition.

It’s time to add some tricks to those treats with these three fun projects to do with kids (of all ages!) that will also teach some basic electronics.

Run Away! It’s ParkerBot! Spiderman’s got nothin’ on this robotic arachnid that will add a whole new dimension to this year’s Halloween displays.

Mind / Iron
by Bryan Bergeron
Workshop Air Quality Sensors
Volatile organic compounds (or VOCs) expelled into the air can be dangerous to your health.

Then and Now
by Tom Carroll
What We’ve Learned from the DARPA Robotics Challenge
In reality, the DRC was a huge success, despite some set-backs and falls.

There are risks inherent in designing a robot to accommodate a modular weapon setup.

After back to back crushing defeats by Pretzel Robotics' Vile Ant and Low Blow, it became clear I needed a better Antweight robot.


BUILD REPORT: Splatter: The Evolution of a Combat Robot

by Matthew Vasquez
in The Combat Zone

For nearly my whole life, I have been involved in the world of combat robots.