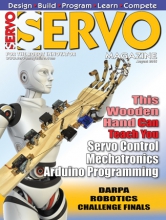 This Wooden Hand Can Teach You: Servo Control, Mechatronics, and Arduino Programming

A chronicle of how an old lager was reborn as a loyal friend and show companion.

This time, see how to use G-code files to create actual parts.

Get a bird’s eye view of this “Super Bowl” of robotics.

Although this da Vinci inspired wooden hand looks simple, it demonstrates some fundamentals of servo control, Arduino programming, and mechatronics for under $300.


Animatronics for the Do-It-Yourselfer — It’s All In Your Head!

Make your robotic characters more life-like by giving them a voice and some head movement with these simple-to-learn techniques.

Mind / Iron
by Bryan Bergeron
Not Your Grandmother’s Singer
The current poster child of the DIY community is the 3D printer. However, from both a technological and market share perspective, the modern inexpensive sewing machine is the creative DIY tool of the masses.

Twin Tweaks
by Bryce Woolley, Evan Woolley
The Adventures of Bogie and Sprout
Do some base “jumping” with Runt Rovers — Actobotics newest line of platforms.

Then and Now
by Tom Carroll
Police and Security Robots
With the unrest in today’s society and the dangerous kinds of scenarios that are playing out, using robots to protect human life is becoming more and more prevalent. However, you need the right type of robot for the particular job.

Back to Do Battle

by Russ Barrow
in The Combat Zone

In building any robotic system, every part of the system must be tuned to provide the maximum possible reliability and performance.


BUILD REPORT: The Build of Ash and Its First Event

by Jack Tweedy
in The Combat Zone

Ash was intended initially to be an improved version of the UK Beetleweight, RPM, although somewhere through the design process, my friend (the infinitely better than myself, Harry Hills) suggested I go for a four wheel drive vertical spinner.

Afew years ago, the original Insect arena used for DragonCon Robot Micro Battles was retired and a new arena was built.