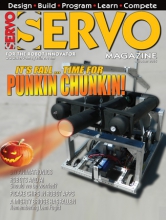 A Mighty Bridge has Fallen

The world of robotics lost one of its own recently. Lem Fugitt will be remembered as the world’s biggest fan of all robots — big and small.


Animatronics for the Do-It-Yourselfer

Big Red — A Bartender Only a Pirate Could Love! Just in time for Halloween, this build is one of the more complex projects attempted. Plus, it is the perfect example of being flexible when you need to abandon an original design and restart from scratch.

The extruder is the heart of a 3D printer. This article examines all of its different parts, how to build them correctly, and how to fix one that’s having issues.

See how students were challenged with working in simulated extreme polar conditions.


Controlling the Beast — Interfacing Analog Controls in a Digital World

Utilizing retired parts from former BattleBots™ competitor, Hexadecimator, get some insight into working with analog-to-digital signals and build a go-cart in the process.

LEDs, IR Control, and Servos We continue with our tips and techniques for implemeting PICAXE 08M2+ chips in robotic applications.

This self-made family of roboteers started from scratch and now make rovers for museums.

The HomeBrew Robotics Club TABLEBot Challenge is in full swing. Check out these highlights on what has happened so far.

Then and Now
by Tom Carroll
AI and Robots Take Over Mankind!
Maybe artificial intelligence isn’t the best idea after all ...

Wood you like to know how I built my newest hockey bot? STICK around and I’ll explain the whole thing to you.

In last month’s SERVO, I modified a HobbyKing CAR-45A and tested it to see if it was suitable for use as a weapon ESC (Electronic Speed Controller) for 3 lb Beetleweights.

by Ryan Zimmerman
in The Combat Zone

The eighth annual Bot Blast at the Columbia Mall in Bloomsburg, PA was the largest event in the Blast's history, as robot combat enthusiasts from across the nation converged on the small rural Pennsylvania town for a day of friendly competition, camaraderie, and fun.