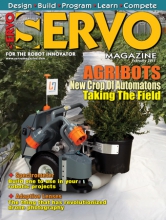 Part 2 discusses the electronics required to control the motors and communicate with sensors.


littleBot: A Modern Build on a Classic BEAM Robot

littleBits — an ever-growing library of electronic modules that snap together — is put to the test to recreate a classic robot design.

The latest generation of adaptive lenses has revolutionized still and video photography for use with drones and other applications.

Some basic guidelines are discussed for anyone who would like to investigate artificial intelligence by playing around with a robot.


A Spectrometer for Your Robot Projects

For about $30 and a few hour’s work, you can build an Arduino based spectrometer to perform basic experiments with.


The Turing Test: From Inception to Passing

Turing is often hailed as a father of modern computing and he played a pivotal role in breaking Germany's "Enigma" code, an effort that some historians say brought an early end to World War II.


The Basics of Soldering

In this next part of our skill-building series, learn some tried and true through-hole component soldering practices.

Ask Mr. Roboto
by Dennis Clark
Your Problems Solved Here (02.2015)
See how to design and use a Workshop 4 integrated development environment layout for the 4D Systems’ PICadillo 35T.

Twin Tweaks
by Bryce Woolley, Evan Woolley
Robots Have Got Your Back
With all this crazy weather we’ve been having lately, some help filling sandbags would really come in handy.

Then and Now
by Tom Carroll
The Challenge of Agricultural Robots
Take a look at the growth of robot usage in the agriculture industry.

by Jeff Gier
in The Combat Zone

Gear motors from eBay are often appealing because of their price point, but lack a lot of detailed specifications.

Every few years, the Combat Zone surveys the builder community to help keep current with the state-of-the-art in destructive bot technology.

Whenever I go to events, I love to chat with the other builders about their experiences.