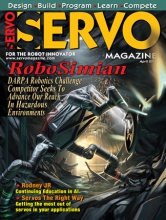 How I Came to Design Extraterrestrial Robot Submarines

Part 1: Probing Saturn’s Moon, Titan. Follow along with this NASA project that makes you think twice about what oceans really are.

Learning is random and hap-hazard at first. Ultimately, you gain memories of what to do based on prior experience, then use this info in similar situations. This is basically how we learn ... and how robots can learn too.


Build Your Own 3D Printer with Actobotics

After a failed experience with a low cost kit, inspiration struck to design and build a custom 3D printer with some rock-solid construction material and some simple hand tools.

This unique club takes kids (ages 8-12) and turns them into robot-inventing moguls.

Learn how to get the most out of servos in your robotics applications.

GeerHead
by David Geer
RoboSimian: Disaster Recovery Robot or Vaudeville Contortionist?
With four arm/legs that walk, grasp, and bend every which way, with seven joints per limb, the RoboSimian — like its close cousin, Surrogate — takes a decidedly unconventional approach to considering its next move and taking action.

Then and Now
by Tom Carroll
Robot Grippers, Claws, Hands, and Arms
Get a leg up on adding “appendages” to your next robot, and what is currently being used.

The Influence of Combat Robot Kits

If you go to any robot combat event, you are bound to see at least one robot that comes from a kit.

The pits at a DragonCon Robot Battles are full up with builder’s cruft and last-minute assembly frenzy.

by Troy Mock
in The Combat Zone

For a third of my life, I've been a competitor and champion in the world of combat robotics.

FingerTech Robotics has offered a "Viper" robot kit for quite a few years, but for a long time it was not really a great starter combat bot if you wanted something that would be competitive. It worked well enough, but without some extensive modifications it was difficult to turn it into a competitive combat robot.

Winter was doing its best again to make life tougher on the East coast, but fortunately it did not have the same effect at Motorama (organized by NERC; [url=http://www.nerc.us]http://www.nerc.us[/url]) as it had last year when only two-thirds of the competitors made it.