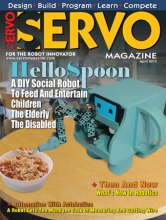 Take the mundane task of measuring and cutting battery lead wires and give it to your robot.


M is for the Robot that ARM Made

Meet mBot — a new platform for working with embedded robotics that is affordable, programmable, and downright fun.


The Basics of Soldering

Knowing how to solder surface-mount components by hand is a valuable skill when working with strict space requirements.

This labor-of-love creation attempts to give folks with disabilities some of their independence back by helping them feed themselves, among other things.

In this final installment, see how Arlo’s arms and turret can be controlled through a second instance of RobotBASIC running in the background to truly make this the robot of your dreams.

Then and Now
by Tom Carroll
What’s New in Robotics
Catch up on some of the latest advances in robotic products.

by Holden Berry
in The Combat Zone

In April 2003, I was eight years old when I attended my first robot combat event as a driver.

by Richard Loehnig
in The Combat Zone

The NTMA Training Centers Robotics League (TCRL) kicked off 2015 with a bang.

Imet Mike Jeffries in 2011. This new guy shows up at DragonCon with some serious hardware: a sweet 1 lb and a 12 lb that looked like it could stop a bullet.