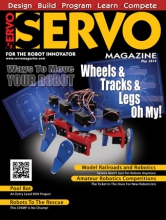 Ways to Move Your Robot

All mobile robots move. Wheels, tracks, and legs are the most common ways. Which one should you use? That can be a tough question. Selecting the right system starts with figuring out what you want your robot to do.


All About PIC Pulse Width Modulation

PWM is a valuable technique with many applications.

There’s a new application movement going on for our beloved robotic component: controlling model trains. Check out these cool methods that might inspire an idea for your next robot project.

In this installment of our conversion series, the necessary components and the software needed to control the mill will be discussed.

Build your own personal mermaid detector for your pool.

GeerHead
by David Geer
Carnegie Mellon University CHIMP Robot
This DARPA Robotics Challenge contender is enabled for disaster recovery and rescue, and so much more.

Ask Mr. Roboto
by Dennis Clark
Your Problems Solved Here (05.2014)
Issues with streaming video from your bot and making sense of micro-sensors.

Then and Now
by Tom Carroll
Amateur Robotics Competitions and Exhibitions
These different group efforts make a big difference in the robotics community — especially for kids.

With the drive platform done and almost eight pounds to spare, there was a lot of room for the weapon systems.


The Evolution of Attitude

by Troy Mock
in The Combat Zone

My venture into the three pound Beetleweight class began in 2009 when I was in the eighth grade.

In Part 3 of this series, I had received most of the parts and started work on the chassis. Is this part, I will put together the drive motors, complete the rest of the parts, and assemble the bot. I was on a tight deadline as there was only four weeks to go before the bot’s first event ...