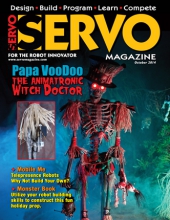 Robots Under the Sea

For the past 13 years, MATE has sponsored a competition to advance education and encourage ocean exploration with ROVs.

Here’s a quick tutorial on running ROS with a BeagleBone or Arduino.

Making Robots with the Propeller Activity Board: Part 2

In Part 2, we’ll move forward with completing the PropBot’s electrical subsystems, then give the robot its first taste of adventure with a simple servo test routine.

With the high cost of telepresence robots, wouldn’t it be nice if you could just make a simple one of your own? Well ...

DIY animatronics are really changing the landscape of holiday displays.

In the spirit of the holidays, here’s a fun project that will utilize skills that will help you in your robot building.

Twin Tweaks
by Bryce Woolley, Evan Woolley
10 Years of Star Stuff
Once a Cluster Assistant himself, Evan had the opportunity recently to check back with the University of California, San Diego’s COSMOS program to see what all has changed with the innovative curriculum.

Then and Now
by Tom Carroll
New Technology for Today’s Home-Built Robots
As technology moves forward, accessibility to new and improved products has made it that much easier for robot builders to create the automaton of their dreams.

Weta, god of ugly things — my 3 lb Beetle weight — has always had a different beater bar than the kit bots for which it was the prototype.

Clash of the Bots 2014 took place in Gastonia, NC at the Schiele Museum on July 19th. This was the fifth Clash of the Bots event and the eighth overall event put on by Carolina Combat Robots.

by Ryan Zimmerman
in The Combat Zone