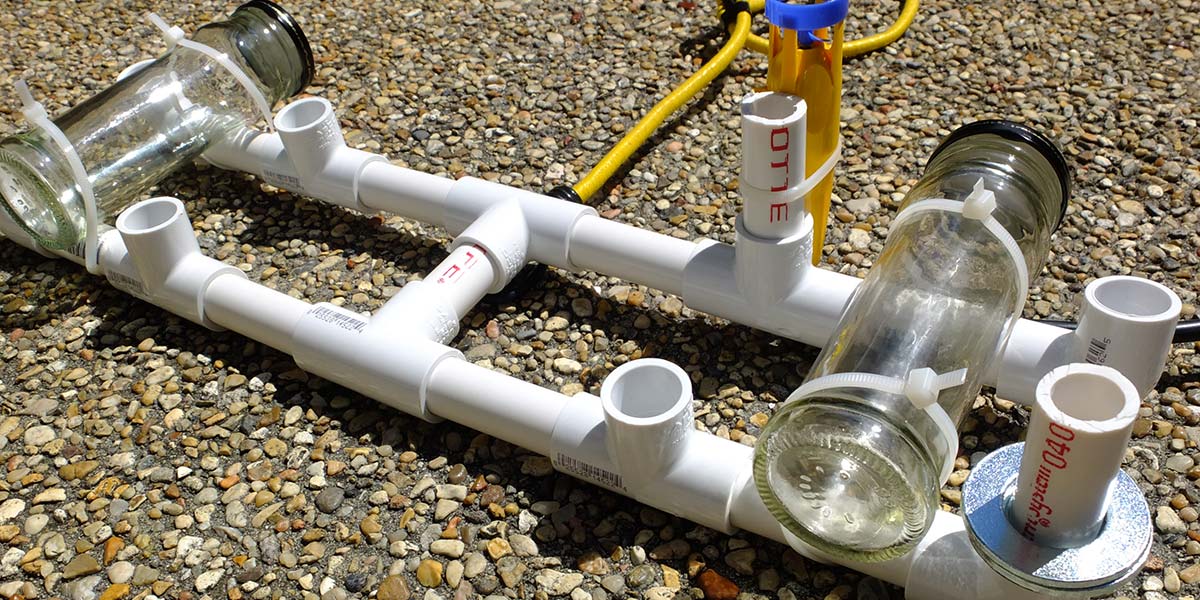 Build Your Own Underwater ROV for Less than $100

What's that on the bottom of the swimming pool? It's big and dark and near the drain. Well, if you have about four hours of time and around $100, you could easily find out what that thing is. In less time than it would take to hire a pool boy, you can build an underwater remotely operated vehicle (ROV) that can deftly descend to the pool's drain and quickly ID whether you have debris or a mermaid living in your pool.

Pool Bot is built on a framework of Schedule 40 PVC tubing and connectors. While there is nothing extraordinary about utilizing this building material for the construction of an ROV, the hallmark of the project is that none of the PVC joints are glued together. Couple this virtue with employing cable ties as support structure and Pool Bot can be disassembled for convenient storage, and rebuilt for spontaneous periodic inspections of the swimming pool.

While adept at tooling about a swimming pool, Pool Bot can also be used in both natural freshwater and saltwater environments. Remember, if used in either one of these natural aquatic resources, the entire ROV should be thoroughly scrubbed and cleaned prior to storage. Failure to properly clean all of Pool Bot’s surfaces can result in the formation of mold and rot which could destroy the ROV.

Another more prominent and controversial aspect of Pool Bot is the use of a single 9V battery for a power supply. Adding electrical power to any ROV is a complex task that generally involves long, thick, waterproof umbilical cables that stretch from the above-water operator’s position to the underwater ROV. By using a 9V battery, however, the need for extensive waterproofing and cable bulk can be reduced.

There’s no need to charge batteries or lug a lead-acid battery around. The Pool Bot 9V power is easy to carry and easy to connect. Likewise, the amount of cable needed for a lightweight 9V ROV is reduced to a neatly braided twist of six 22-gauge wires. The length of these wires is determined by the distance from shore to the target depth inside the swimming pool. Generally speaking, a spool of 20 foot pencil diameter wire should be sufficient for most pool excursions.

Before you start construction of Pool Bot, make sure that you have two empty and clean olive jars. While olive jars aren’t mandatory (i.e., bacon bits, pickled peppers, etc. are good alternatives), any clear glass cylindrical household grocery jar will work. If glass jars are a concern for you, use plastic soda bottles with weight added inside (sand, rocks, etc.) instead. Just make sure that both jars (or plastic bottles) are identical in size, weight, etc., and the lids can create an airtight seal.

You can test this requirement by loading each jar with several heavy metal washers, attaching the lids, and holding the jars under water for several minutes. If you don’t see any air bubbles streaming from the lid and the contents are still dry after this water test, the jar can be used for Pool Bot.

One final precaution: Even though the power supply is a modest 9V system, water is still a deadly enemy of Pool Bot’s electrical motors. Make absolutely sure that the entire ROV propulsion system, camera system, and LED lighting system are completely and thoroughly waterproof. Liberal applications of waterproof silicone sealant to every critical opening, joint, and conduit is essential.

Also, watch for breaks in the wiring insulation; one crack can doom the ROV. Frayed, cracked, and abraded wiring should be immediately replaced. 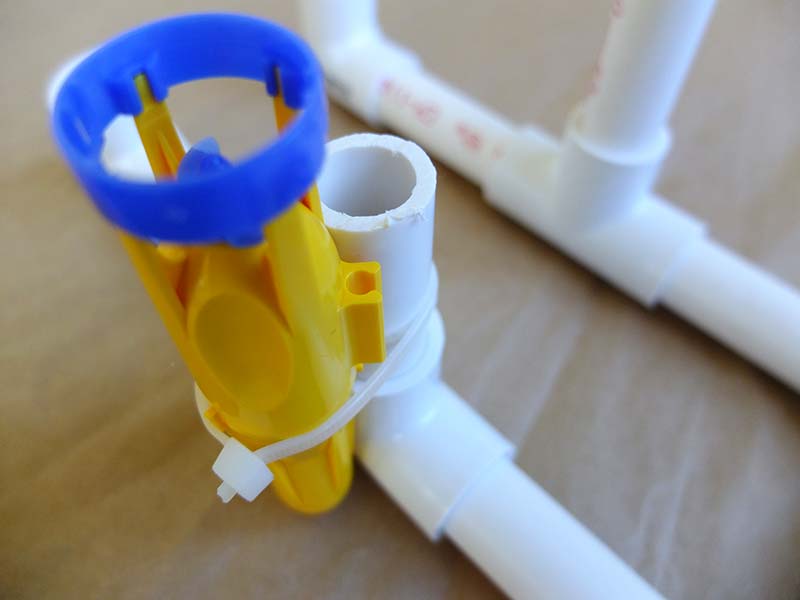 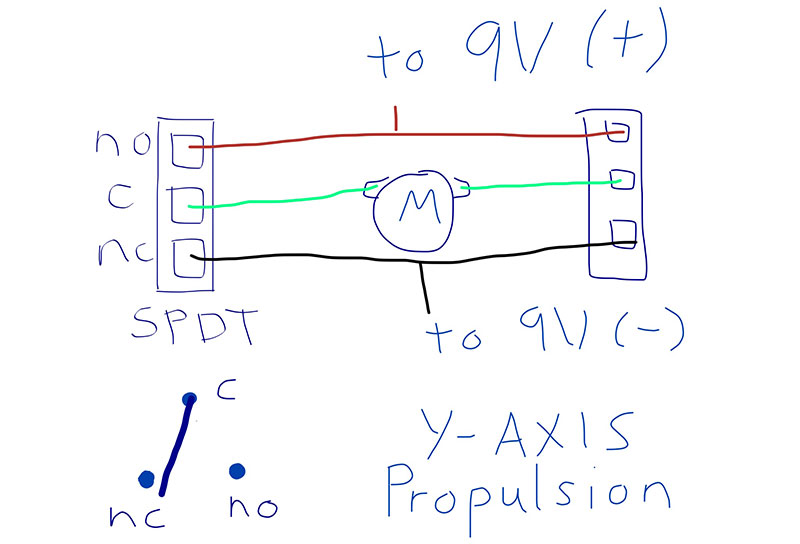 WARNING: Be absolutely certain that you can safely turn on each LED lighting system switch, drop the system inside each jar, and securely attach the lid to each jar before you launch Pool Bot. Any water that leaks inside the jar could cause a dangerous short circuit.

NOTE: If you elect to skip the LED lighting system, you must still install the two empty jars on Pool Bot. These jars add to both the structural stability of the ROV and help establish the unit’s buoyancy.

WARNING: Make sure the power and video signal cable connectors are not near the water during testing.

NOTE: Many automotive backup camera systems require 12V. In order to easily and conveniently introduce 12V into the Pool Bot system, wire two 9V batteries in series, i.e., connect the negative terminal from one 9V connector to the positive terminal of another connector. Route the remaining positive and negative terminals through a 7812 voltage regulator IC. Refer to the voltage regulator’s datasheet for connection information.

Test the completed Pool Bot on dry land before you attempt your first “sea trial.” There are four main tests that you should perform: propulsion system (e.g., press an SPDT button and the correct motor should turn in the proper direction); lighting system (e.g., turn on each LED switch and seal the LED inside its respective jar); camera system (e.g., turn on the closed-circuit monitor and ensure that you are receiving a good video signal); and analog recovery system (e.g., lift Pool Bot up off the workbench by pulling on the nylon cord).

If all tests are completed successfully, then move onto your first sea worthiness test. If, on the other hand, any of the tests were not successful, make corrections to your construction and try the tests again.

Before throwing Pool Bot into the swimming pool, a sea worthiness test must be successfully performed. The main objective with this test is to establish the buoyancy of the ROV. Ancillary ballast and trimming will also be necessary during testing. 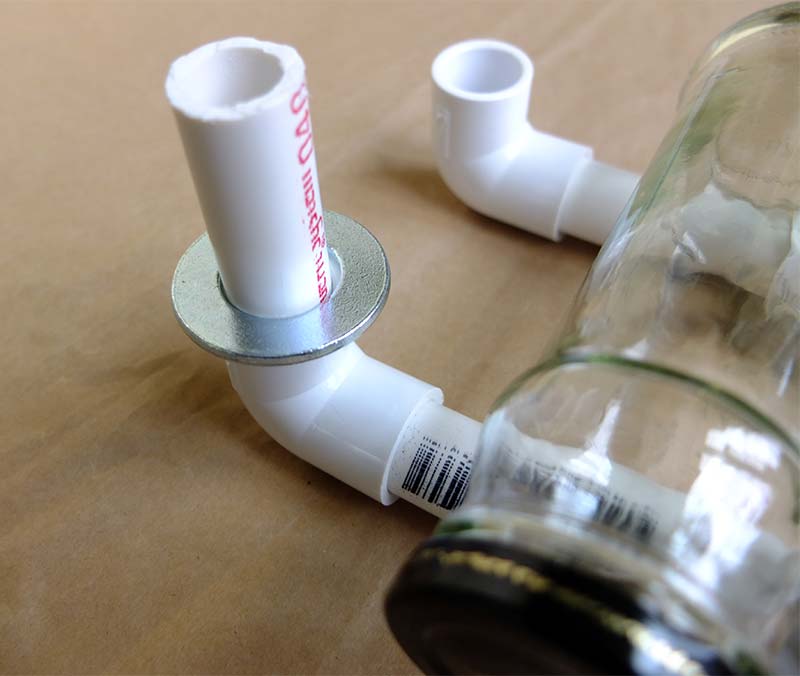 First of all, disconnect the power supply from Pool Bot. Likewise, switch OFF both LED lighting systems. Use a two to three foot deep container filled with water (e.g., laundry room sink, bathtub, barrel, etc.) and set the ROV into the water.

Ideally, Pool Bot should float perfectly level just below the surface of the water. Flat washers are used as ballast for obtaining the proper buoyancy, as well as for trimming and/or balancing the vessel. 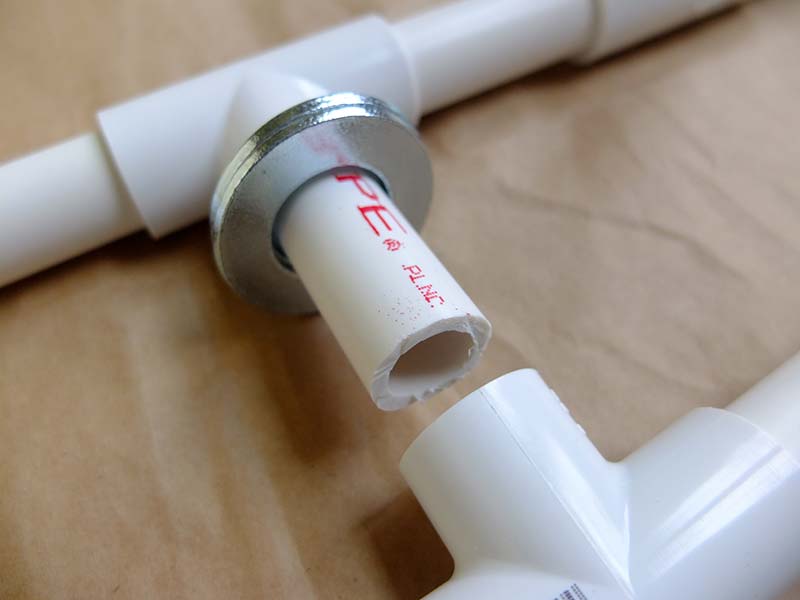 Ballast. Flat washers are added to the center keel pipe piece for establishing the ROV's buoyancy.

Carefully slip flat washers over the center keel pipe piece. Depending on the air volume and glass thickness of your jars, this step could take quite a few washers. Once the proper buoyancy has been determined, slide the washers forward and backward until the ROV rests perfectly level just below the surface of the water. Secure the washers in this position with two cable ties (one tie added ahead of the washers and the other cable tie fixed behind the washer line-up).

When all of the trim washers have been added, secure each stack with a cable tie. Pool Bot should now be ready for its maiden voyage.

Take your entire underwater ROV setup outside and connect the power supply to Pool Bot. Test each propulsion control switch to ensure that you have adequate power for this voyage. If power looks good, flick each LED switch ON and seal each jar, lower Pool Bot into the water, and press the descent (Y axis; down) motor button. Away she goes!

Slowly pay out both the power supply umbilical tether cable and the nylon recovery cord. Don’t be tempted to braid the cable and cord together. One accidental tug on the nylon cord could sink Pool Bot in a power loss short-circuit crash. Watch the video signal on the closed-circuit monitor and methodically apply short downward thrust bursts coupled with short bursts of forward (Z axis) thrust. If properly balanced and trimmed, short motor runs are ideal for navigating Pool Bot.

Once you’re comfortable “driving” your ROV around the swimming pool, try to make your way over to the big dark mass that you initially found lurking around the pool’s drain. A skillful skipper should be able to glide up to that mass and retrieve it with the aquarium net.

Don’t be too surprised, however, if that stagnant dark mass turns out to be a slumbering snapping turtle that doesn’t like ROVs disturbing its sleep. SURFACE! SURFACE! You’re probably going to need a bigger boat!  SV

* This list includes the components for all of the optional systems.